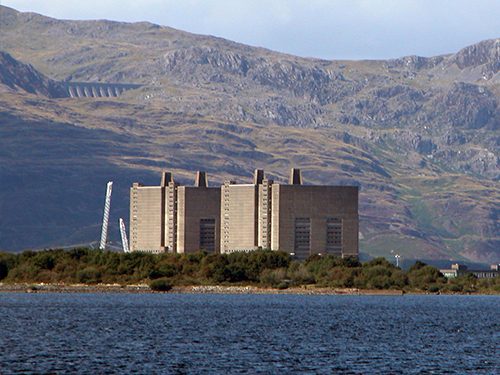 A UK nuclear developer has abandoned two projects in a decision described as a “huge blow” to the industry, after Japanese multinational conglomerate Hitachi announced it was withdrawing from one of the two, the £15- to £20-billion Wylfa Newydd plant on Anglesey, Wales.

The massive megaproject “was suspended in January last year because of rising costs after Hitachi failed to reach a funding agreement with the UK government,” the British Broadcasting Corporation reports. “Isle of Anglesey council said the company had now confirmed in writing it is withdrawing from the project.”

Hitachi “made this decision given that 20 months have passed since the suspension, and the investment environment has become increasingly severe due to the impact of COVID-19,” the company said in a statement.

In the wake of that announcement, Gloucester, UK-based Horizon Nuclear Power said it would also step away from a nuclear plant it had planned to build at Oldbury on Severn, in South Gloucestershire. Horizon’s decision “deals a huge blow to the nuclear industry and hopes of creating thousands of new jobs,” the Ardrossan & Saltcoats Herald adds.

Project proponents said Wylfa Newydd, meant to replace a 44-year-old nuclear plant that closed in 2015, would have created 9,000 construction jobs. Campaigners welcomed the end of a project that “would have endangered lives on Anglesey and beyond.”

“It would have ruined the environment over an area which is 10 times greater than the current site,” said People Against Wyfla B. But “proposals to develop green energy schemes would be an area where Hitachi’s expertise could create many jobs here.”

As recently as last summer, Hitachi had given “reassurances” of its commitment to the project “that gave hope to the workers who’d be needed to construct it and the high-skilled employees who would run it,” said Welsh Conservative Party MP Stephen Crabb, chair of the UK parliament’s Welsh Affairs Committee.

“This was set to be the largest energy project Wales had ever seen, with a positive impact on skills and employment in the region,” he said. “With the nation’s remaining nuclear plants aging and the need for low-carbon, high-yield plants needed to replace them urgent, it has never been more important than now to ensure energy security.”

Nuclear industry messaging positioned the technology as an essential element of a transition off carbon. “It is imperative that a way forward is found for the site, to deliver thousands of jobs, hundreds of apprenticeships, and millions of pounds of investment into an economic boost for the area while delivering secure, reliable, and low-carbon power to underpin the UK’s transition to net zero,” said Nuclear Industry Association CEO Tom Greatrex.

“The cancellation of what would have been the largest energy project in Wales, if it cannot be reversed, could have huge consequences including the loss of between £15 billion and £20 billion in investment,” added Labour MP Alan Whitehead, shadow minister for energy and a green new deal.

“We are already in the middle of an economic and unemployment crisis, yet the government has been completely silent on the potential loss of this power station and the economic impact for Anglesey and the region,” he added. “Ministers must urgently outline whether they plan to seek new developers to take on the Wylfa project, what conversations they have had with Hitachi about the site, and how they will ensure the people of Wales do not pay the price for Hitachi’s withdrawal.”

“Nuclear power will play a key role in the UK’s future energy mix as we transition to a low-carbon economy, including through our investments in small and advanced modular reactors,” responded an unnamed government spokesperson. “That’s why we previously offered a significant package of potential support to this project that went well beyond what any government has been willing to consider in the past.”

Only One in Three Canadian Dealerships Stocks EVs Despite Surging Demand