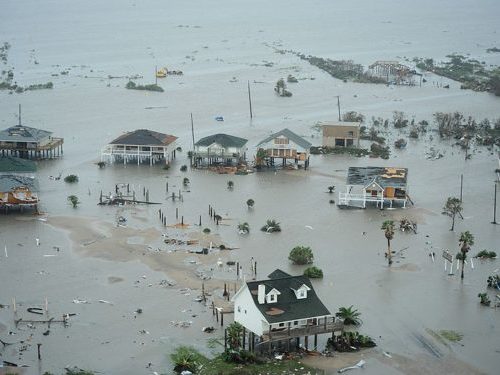 Hurricane Sally weakened to a tropical storm but still brought catastrophic flooding to parts of the U.S. Deep South this week, leaving at least one person dead, 500,000 homes and businesses without electricity, and rivers and streams overflowing their banks.

“The storm crashed ashore early Wednesday as a Category 2 hurricane in Gulf Shores, Alabama, about 30 miles west of Pensacola,” USA Today reports. The 105 mile/169 kilometre-per-hour winds “toppled trees and telephone poles and tore the roofs off some homes. The slow-moving soaker pounded areas of Florida and Alabama with two feet of rain or more.”

In response, “rescuers along the Gulf Coast used high-water vehicles Thursday to reach people cut off by flooding in the aftermath,” the paper adds, and rising floodwaters could hit record-high levels along eight waterways in the days ahead.

And then, “a day after leaving a swath of coastal Alabama and Florida in ruin, Sally pounded Georgia and the Carolinas with torrential rain,” the paper adds. “A foot (30 centimetres) or more was possible, and up to eight inches (20 centimetres) in parts of Virginia, before the storm’s remnants slide into the Atlantic.”

“While in the Gulf of Mexico, Sally picked up tremendous amounts of moisture from the warm waters, which it is wringing out as heavy rainfall over the Southeast,” the Washington Post notes.

The key to Sally’s destructive power was not the speed of its winds, so much as the slow pace at which it moved. The storm “parked itself over the Gulf of Mexico on Tuesday, churning slowly and lumbering at a sluggish pace toward land, representing a climate change reality that has made many hurricanes wetter, slower, and more dangerous,” the New York Times writes. “Meteorologists worried—and almost marvelled—as the storm pushed forward at a speed of just two miles per hour, shifting erratically in its path and intensity.”

Studies in 2018 showed the “translation speeds” of hurricanes and tropical storms decreasing 10 to 15% as Arctic warming, in particular, weakens atmospheric circulation. “But rather than serve as a source of comfort, its languid speed only intensified the unease,” the paper adds. : Sally “is dangerous, meteorologists warned, precisely because it is so slow. Its lingering could translate into major flooding, with more rain than the region typically records over several months.”

While Sally makes its way through the southeastern U.S., the journal Science Advances is out with an assessment of how partisan attitudes shape Americans’ perception of hurricane risk. “Mistrust of scientific evidence and government-issued guidelines is increasingly correlated with political affiliation,” write co-authors Elisa Long, Keith Chen, and Ryne Rohla in their research abstract. Based on a combination of cell phone GPS data from Florida and Texas and precinct-level results from the 2016 presidential election, “likely Trump-voting Florida residents were 10 to 11 percentage points less likely to evacuate Hurricane Irma than Clinton voters (34% versus 45%), a gap not present in prior hurricanes.”

Those findings “are robust to fine-grain geographic controls, which compare likely Clinton and Trump voters living within 150 metres of each other,” the researchers add. “The rapid surge in media-led suspicion of hurricane forecasts—and the resulting divide in self-protective measures—illustrates a large behavioural consequence of science denialism.”

At 5:00 PM Thursday, the U.S. National Hurricane Center had Hurricane Teddy intensifying to a Category 4 storm with maximum sustained winds of 140 miles/225 kilometres per hour. “There is some chance Teddy could strike Bermuda and then northern New England toward the middle of next week,” the Washington Post warns.