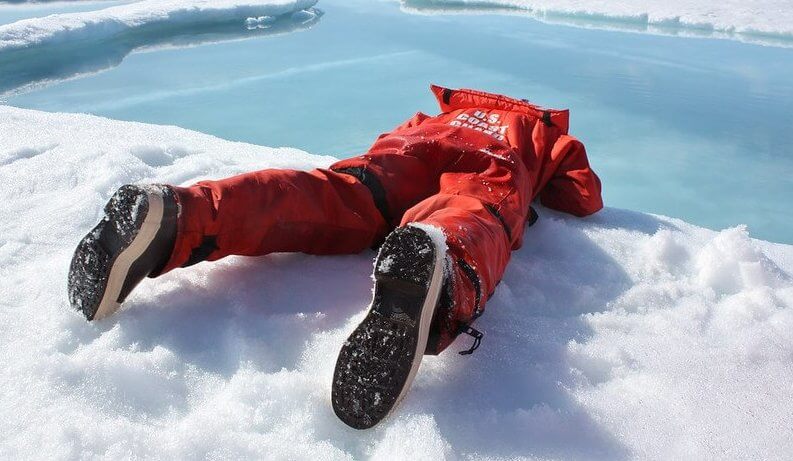 A scientist drinks fresh water from a melt pond on sea ice in the Arctic Ocean. Image: By NASA/Kathryn Hansen

Change in the far north is happening so fast that soon the melting Arctic won’t be arctic any more.

LONDON, 16 September, 2020 − The word Arctic may be up for redefinition. The conditions within the melting Arctic Circle are changing so fast that what was once a frozen seascape could now be entering a new climate regime in which nothing is predictable.

Even in an unusually cold year, the sea ice may not return to the summer limits normal in the last century. For some months of autumn and even winter, rain will fall instead of snow, US scientists report in the journal Nature Climate Change.

“The rate of change is remarkable,” said Laura Landrum, of the US National Centre for Atmospheric Research, who led the study.

“It’s a period of such rapid change that observations of past weather patterns no longer show what you can expect next year. The Arctic is already entering a completely different climate than just a few decades ago.”

She and a colleague looked at four decades of satellite data and ground observations and hundreds of computer simulations to confirm that polar warming is happening at such a rate that any change year to year is no longer within the extremes of the past. Conditions that were once normally changeable are now abnormally so.

Climate in the northern hemisphere is moderated by temperature differences that vary with latitude: between them, a torrid equator and a frozen Arctic drive the prevailing winds and ocean currents and the mix of cloud, sunshine, rainfall, frost, windstorm, dry spells and seasonal flooding in which agriculture, industry and civilisation have evolved for the last 10,000 years.

But as carbon dioxide levels in the atmosphere soar in response to rapidly-increasing use of fossil fuels, the melting Arctic has been warming far more swiftly than the planet as a whole.

The extent of summer sea ice in each of the last 13 years has been lower than any minimum observed since 1979, when systematic observation began. Winters have been warmer, winter sea ice has been reduced, rain has been falling on snow ever earlier.

The climate scientists posed themselves the simple question: “While these changes appear extreme compared with the recent past, are they climate extremes in a statistical sense, or do they represent expected events in a new Arctic climate?”

The answer seems to be: yes. The researchers tested their statistical techniques on five different climate simulations. Each of these showed the sea ice retreating so dramatically that a new climate had emerged some time in the late 20th and early 21st centuries.

The finding fits a pattern of foreboding delivered by recent research. In the last two months, researchers have warned that ice loss in the Arctic regions has been so severe that the region’s most charismatic predator, the polar bear, may be gone by the century’s end.

Another group has warned that the Arctic ocean in late summer may be effectively ice-free within the next 15 years.

One group has concluded that ice loss from Greenland is now at such a rate as to be irreversible, and another has confirmed that the rate of ice melt from the northern hemisphere’s biggest reserve – enough to raise sea levels six or seven metres – last year reached new records.

And this month an international research team reported that the rate of change in the Arctic has exceeded the “worst-case” scenario proposed by climate researchers.

Dr Landrum and her colleague report that − if greenhouse gas emissions continue at their present rate − some of their climate forecasts predict a mostly ice-free Arctic for between three and 10 months a year, every year, by the end of the century.

Air temperatures over the ocean in autumn and winter will become warmer before or by mid-century, and then start warming over land in the second half.

In a warmer world, more water will evaporate and fall again as rain. Over Alaska, northern Canada and northern Siberia there will be more rain rather than snow: by mid-century, perhaps an extra 20 to 60 days, and by 2100, perhaps from 60 to an extra 90 days. In some parts of the Arctic, by the century’s end, rain might fall in any month of the year.

“The Arctic is likely to experience extremes in sea ice, temperature and precipitation that are far outside anything we’ve experienced before,” Dr Landrum said. “We need to change our definition of what the Arctic is.” − Climate News Network