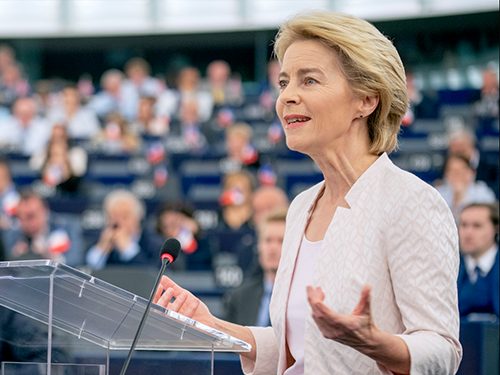 Europe is on track to increase its 2030 greenhouse gas emission reduction target from 40 to 55% after the centre-right European People’s Party (EPP), the continent’s “biggest and most influential political faction”, threw its support behind an updated EU-wide goal.

European Commission President Ursula von der Leyen—who “herself hails from the EPP and received [German Chancellor Angela] Merkel’s blessing to pursue a bolder climate agenda”—is expected to announce the higher target in a State of the Union speech this week, Euractiv reports. The shift “will not be conditional on other countries or regions signing up to higher climate targets as well.”

The EPP bloc had previously supported a 50% target, saying it would go no farther without cost-benefit analysis and parallel commitments from the United States and China, Euractiv says. But “obviously, the impact assessment indicates that it’s economically feasible,” said senior EPP Member of European Parliament (MEP) Peter Liese.

“There is a shift of sentiment inside the EPP group,” one party insider told Euractiv. “Certainly the tone has changed a lot,” partly because “many Germans who were reluctant now see this as an opportunity”.

The “wake-up call”, Euractiv adds, may have been the strong performance of Green Party candidates in European parliament elections in May 2019.

Analysis elsewhere distinguishes the policy shift in Europe from decisions by China and other big, global emitters that will hinge on the results of the U.S. presidential election in November. But even the EU is having to factor in the possibility of another four years of Donald Trump, Politico writes, in a post co-authored by former Climate Home News editor Karl Mathiesen.

“If [Democratic nominee Joe] Biden wins the election, all of a sudden we know we have a big ally again,” said Dutch Climate Envoy Marcel Beukeboom. “But in a way, it’s also a gamble. Because it could be Trump for another four years, so we have to have two scenarios and two plans concerning international climate policies.”

“So consequential is the U.S.—especially when it comes to the direction China takes—that many governments are running down the UN timeline to see which way the wind blows after November,” Politico writes, citing six current and one former climate diplomat. “The idea is that a Biden victory, followed by an EU-led flurry of new plans to mark the end of 2020, could lead the U.S. and China to overcome trade and strategic tensions to work together on climate change in 2021. That could help drive greater international momentum before COP 26,” next year’s UN climate conference in Glasgow.

But for now, “nobody has said it in public, but in private everybody understands that the U.S. presidential election is the key milestone [for China],” said Greenpeace East Asia climate specialist Li Shuo. “Things will slowly begin moving after the election. Under a Biden scenario, there will be more opening on the Chinese side on things like [climate pledge] enhancement.”

The EPP’s shift to an incrementally higher target still falls short of 2030 emission reduction targets of 65% proposed by Greens and the Socialists & Democrats (S&D) in parliament, or the 60% put forward by the centrist Renew Europe group, Euractiv says. “I think this is challenging,” EPP MEP Liese said of the 55% goal. “It will not only bring opportunities, it will also bring a lot of efforts from many parts of industry as well as citizens. But it’s doable if we take the right steps.”

That optimism got a boost Monday when the continent’s electricity industry association said even a prolonged economic slump needn’t deter Europe from producing up to 80% of its electricity from fossil-free sources by 2030. But getting that done will mean doubling solar and wind capacity by the end of the decade, Reuters reports.

“This year, the power sector has proven its crucial value for society by providing hospitals, government offices, and millions of home-working Europeans with clean and reliable power throughout the pandemic,” said Eurelectric Secretary General Kristian Ruby. However, “in order to meet the 2030 targets, or go even further, we must urgently remove the specific barriers holding back the progress on the ground.”

In the first six months of 2020, Europe produced two-thirds of its electricity from carbon-free sources, including 40% from renewables—a sharp increase from a decade ago, when they accounted for only 20%, Reuters says. A Eurelectric report showed fossil-generated electricity falling from 52 to 34% in one year.

But recently, “restrictions due to the COVID-19 pandemic have delayed many projects, and permitting procedures are slowing down progress,” the news agency writes. A successful transition by 2030 will also depend on new electric vehicle infrastructure and a commitment to curtail the growth of coal imports.