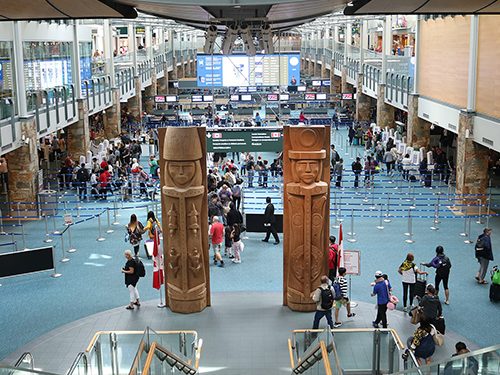 With passenger traffic at Vancouver International Airport (YVR) down 63% from last year, airport authorities have terminated a C$600 million expansion project—and the 4,000 jobs that went with it.

“The list of contracts terminated includes a new ground transportation centre, complete with new parkade, a new central utilities building, and a $350-million geothermal heating system, which was to be YVR’s single most expensive capital expenditure ever,” reports the Vancouver Sun.

Border closures and travel bans led to a traffic drop of 97% at YVR during the early spring of this year, and volume did not rebound much over the summer. YVR anticipates the majority of people will continue to avoid flying until public confidence returns in the wake of a vaccine.

Part of YVR’s much-vaunted Flight Plan 2037, the expansion project “was launched as a $600-million package, and had seen cost overruns,” the Sun writes. Now it’s being shut down “with $525 million already spent.” The longer-term plan “included $9.1 billion in expanded terminals, taxiways, and roads to support an expected 35 million passengers per year.”

Winding up the project will itself be costly, though precisely how much has not yet been determined. The Vancouver Airport Authority, which oversees YVR, hopes to “mothball the facilities built to date in a way that is safe, well-documented, and ready to ‘take off the shelf and started quickly’ when it is needed,” the news story states.

Global travel ills notwithstanding, a $300-million expansion of YVR’s international terminal is still under way, with plans for completion by the end of this year.

Also in relative good health is the airport’s cargo business. “Cargo has been a success story,” said Tamara Vrooman, the former Vancity Credit Union CEO who now heads the Vancouver International Airport Authority. The Sun reports that movements are down “just 28% for the year to date” and there are “signs of rising demand in certain critical categories, such as the transportation of personal protective equipment, agricultural products, and e-commerce.”

The airport authority is now working with business leaders to make sure YVR offers the supports they will need in the future, added Vrooman. She expressed confidence the airport will maintain its position as not only a gateway to Asia-Pacific but also “to the new economy”.