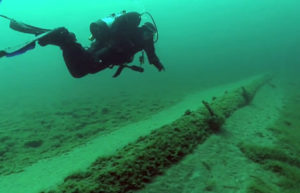 Calgary-based Enbridge Energy has received permission to restart normal operations on the east leg of the aging Line 5 pipeline through the Straits of Mackinac, after a review by the U.S. Pipeline and Hazardous Materials Safety Administration “did not identify any integrity issues” caused by an anchor support being pulled out of place, apparently by a contractor’s support barge.

“Judge James Jamo approved the restart in a revised restraining order issued [last] Wednesday at Enbridge’s request,” Bridge reports. “It came with the consent of state lawyers who had asked for the shutdown in the immediate wake of the damage, after federal regulators and an independent expert retained by the state concluded the pipeline was not structurally damaged.”

The ruling was “very positive for the many residents and businesses in Michigan and the Great Lakes region who depend on the energy Line 5 delivers,” said Vern Yu, Enbridge’s executive VP and president of liquids pipelines.

But “in reality, the reopening may mean little for Enbridge’s customers,” writes Bridge, a publication of Michigan Environment Watch. “Enbridge had previously told Bridge the partial shutdown did not impact its ability to deliver petroleum, because the company was able to meet existing demand using only the west leg of the dual-span line.” Enbridge spokesperson Ryan Duffy “said that remains true today.”

The court ruling is not the end of the story for Attorney General Dana Nessel and other Line 5 opponents, who “have long argued that the pipeline poses an unacceptable risk of an oil spill in the straits,” Bridge adds. “Her temporary shutdown request is tied to a larger lawsuit in which she seeks to permanently shutter the pipeline by voiding the 1953 easement that gives Enbridge permission to operate Line 5 in the straits.”

Jamo’s order last week “doesn’t change the Attorney General’s position in her lawsuit that the pipelines are a clear and present danger,” Nessel spokesperson Ryan Jarvi told Bridge in an email. “The Attorney General’s office continues to pursue the decommissioning of Line 5 in its lawsuit filed last year against Enbridge to protect the public health, safety, and welfare of Michigan’s residents and its natural resources.”