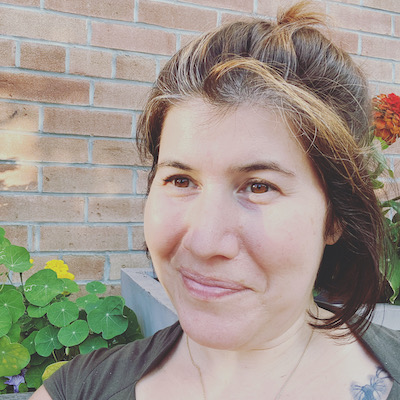 Jessie Sitnick is vice president, corporate and public affairs at Argyle, a self-described “aspiring conversation nudger”, and a leading voice for connecting climate action with environmental justice. In this interview, she talks about white fragility, a moment of crisis, and how a fictional Nazi shone a light on a decarbonized future no one should want.

The Energy Mix: You’ve been making a strong, clear argument that we can’t have climate action and carbon reductions without climate and environmental justice. What brought you to that conclusion?

Sitnick: I grew up in the environmental NGO community in Canada. I loved the work we did, but we were really only talking to a very small group of people. It felt insulated, and it felt frustrating relative to the scale of the problem we were working with. So solving the challenge of how we make this conversation more relevant to people outside the green bubble is something I’ve been chewing on for a long time.

Looking at who’s having these conversations, particularly when it comes to climate policy, you see an audience that is predominantly male, and predominantly white. If you look at who’s working in the sector, you see a lot of people who look like me. But a lot of damage is caused by the perception that this is only relevant to a fairly elite, privileged group of people, when in fact if you look at who’s affected most by climate change, it’s racialized communities, Indigenous communities, people who are facing socio-economic challenges.

I’m paid to be a strategist, and the question was always framed around creating a broader conversation to win votes, to have more political power. So for a long time, I focused on how to get more middle-of-the-road conservatives and rural folks to see themselves in the story. While I don’t think that was wrong, I do think the amount of attention and focus and energy and investment and funding that went into those strategies was disproportionate to what’s required to actually have the kind of inclusive movement that is going to be transformative.

It was really the Earth-shattering moment of the George Floyd murder that forced me to step back and look at myself, not professionally at first, but holistically as a human being, and begin to question more deeply and in a more deliberate and focused way how I’m a part of the problem, how I can be a part of the solution. That brought me to really examining the work I do in the sector.

The Mix: How do you interpret the moment we’re in right now?

Sitnick: I love the quote from Dr. Karen Bakker: “Crisis is a turning point in which weaknesses are exposed, challenges are confronted, and opportunities for innovation arise.” That’s what this moment is. 2020 is the hardest year of my life, I’m sure it’s the hardest year of most peoples’ lives, but sometimes hard is necessary. There isn’t an “upside” to people getting sick and losing loved ones. But as a society, we are having to confront the most difficult realities of being a human being, of being a member of the human species. And once you confront that, it’s very hard to not do something about it. We know the next 10 years will not look like the last 10, and the question we get to answer is, how will it be different. Being able to actually have that conversation deliberately is fairly unique historically.

The Mix: You’ve pointed out that the climate and environment community isn’t always very receptive. One climate newsletter publisher in the U.S. describes the handful of complaints and unsubscribes she receives every time she writes about climate racism. What’s not to get about this?

Sitnick: I think it’s probably a combination of things. One is that there’s the underlying issue of white fragility, and I think for white folks in the environmental movement, the sense that we are good people doing a good thing can become very entrenched as part of our personal identity. Whenever you challenge someone’s personal identity, you’re going to get pushback. So being told that what we’re doing isn’t enough, or isn’t good enough, or is misguided, or is, oh my god, racist, it’s hard for people. It’s hard for white people to really listen to that.

The other barrier, and I think this is misguided, is the perception of what organizations would call “scope creep”. It’s, “obviously I think racial justice is important, but we’re a climate organization, so we have to focus on this issue”. The organizations might even be afraid that if they start to talk about this issue, they’ll be perceived as going beyond their stated charitable purposes, and environmental organizations have gotten slapped very hard [by the Canada Revenue Agency]. So the timidity around going beyond what they perceive to be the bounds of what they’re set up to do, I don’t think you can underestimate that. It’s real.

But I bring a bit of a fundraising lens to this. The environmental sector struggled for a piece of the charitable pie in Canada, the pie isn’t necessarily that big, and it isn’t getting much bigger. And talking about environmental issues as if they are disconnected from health, from social injustice, from poverty, actually does fundraising a disservice. Limiting our ability to speak about what is actually relevant to peoples’ lives is damaging from both an impact perspective and a fundraising perspective.

The Mix: How did white fragility get to be so tough for people to figure out and move beyond?

Sitnick: So much of it comes down to what people are exposed to in their lives, and what they’re not exposed to. We all live, all of us, in a racist society. We were born into it: no matter who we are, what colour our skin is, we all are swimming in the same soup. But we’re all having different experiences of that society. Some of us get to float on the surface and not even feel the soup, not even see it, not know it’s there. Some of us have to swim against the current of it every single day. Where we are in that soup is an accident of our birth.

For a very long time, thinking about the fact that I’m a white person was not a thing I had to do very much. I grew up in a predominantly white, Jewish community in Baltimore. Most of my friends were white people. My parents were very socially active, we had conversations around the dinner table, we tackled tough issues, but racism wasn’t a problem I needed to think about: It was somebody else’s problem. The earlier you tackle that in your life, the easier it becomes. The more you’re exposed to this conversation, the more natural it might feel. But a lot of people live in their bubble, and it’s human nature: if you don’t have to do a hard thing, chances are you won’t do it.

The Mix: On a webinar in July, you talked about a segment in the alternate reality fiction series The Man in the High Castle where a Nazi proclaims his grand, environmental vision of converting desert to a lush, green landscape—just as soon as he can remove all the people who live there. I grew up in a community made up largely of Second World War Holocaust survivors, so your comment set me off on my latest Netflix binge (thankyouverymuch). We could solve the climate crisis in short order if we reduced the world’s population to 500 million—except that’s not the future any of us are fighting for. How do we pause to deal with these deep environmental justice issues when we’re on such a tight timeline to get climate change under control, and how can we ever get that job done without pausing to deal with the deeper issues?

Sitnick: It comes down to what are our actual values, and why we’re trying to stop climate change. The answer to that question is something we take for granted, actually. I don’t think most of us are trying to solve climate change because we’re really worried about ice caps, or because we need the species of lemur that will go extinct in the Amazon if we don’t. We’re driven to solve climate change because we want to survive as a species on this planet. All those banners that say ‘save the planet’? The planet will be just fine. The planet has gone through the works. The planet will survive this, but we likely would not, us and a whole lot of other species.

Preserving our humanity means being humane. Genocide is not humane. Choosing who gets to live and who gets to die based on an accident of birth isn’t humane. So, sure, the other way to solve climate change is like that old axiom, if you want to lose 20 pounds, go ahead and cut off your head. You would get the outcome, but you wouldn’t survive it.

Early in the pandemic, there were stories about how magnificent it was that nature was coming back because people had gone away, and I remember thinking this was absolutely the wrong message, the wrong time to be saying this. Do we want to create in peoples’ minds the idea that human suffering is required to solve the climate crisis? Because if that’s the message we want to share, we might as well dig our own graves and jump in. No one is going to choose that. It just won’t work.

The Mix: Major segments of the climate community have been trying to reach out to historically marginalized communities, and realizing that the first step is to set aside your own assumptions and listen. Is that approach a template for building a wider base of support for climate action, even with people we don’t think of as marginalized?

Sitnick: Oh, 100%, and that’s where I started. When I talk about audience-centred communications, that’s what I mean. You start from where people are, not from where you want them to be or wish they were. We always want to change peoples’ priorities from what they are and get them to agree with us that climate change is the most important thing. But that’s difficult. We’re setting ourselves up for failure, and it’s completely unnecessary.

I don’t care whether somebody believes climate change is the most important thing as long as they’re acting on it for their own reasons. So the question I want to ask is, what is the way into it? What’s the opportunity here? What if it isn’t about solving what I think the problem is, but getting at what they think the problem might be?

The Energy Mix: Is there anything you’d like to add?

Sitnick: If there’s one really important thing I hope people take away from this conversation, it’s that we cannot solve the challenge of climate change without a deep commitment to empathy, not just to communications, but to dialogue. These have to be conversations. It is time, this is the moment, that we in the environmental community see ourselves as inextricably connected to anyone who is working for a more just and humane world.