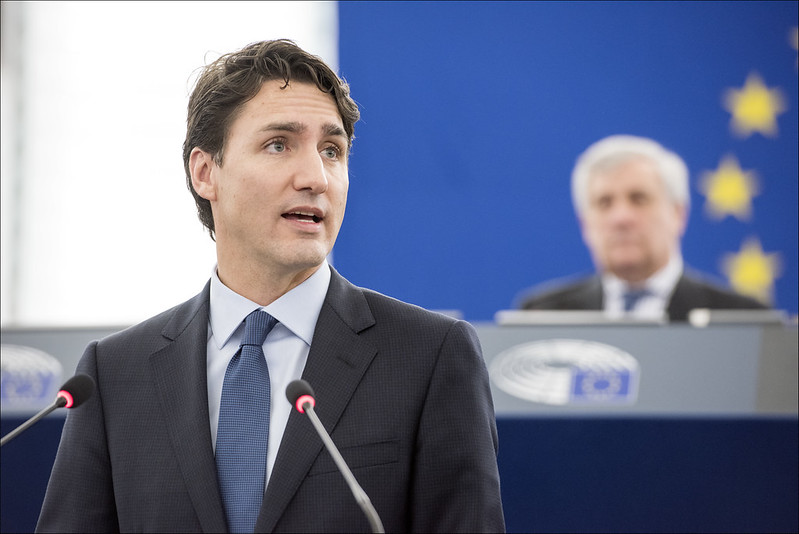 With the latest news and commentary out of Ottawa pointing to housing, employment insurance reform, and long-term care as main focal points for the September 23 Speech from the Throne, the fossil industry is pushing the Trudeau government for more bailout dollars and regulatory delays as part of the economic recovery from the pandemic.

The final shape of the Throne Speech is still a matter of speculation, with final decisions expected at a cabinet retreat beginning today. And the battle lines are drawn.

“Canada’s fossil fuel sector is looking to this month’s throne speech for signs the federal government is not throwing in the towel on oil and gas,” The Canadian Press reports. “Canadian climate strikers are threatening mass protests if the same speech doesn’t show a plan to eliminate all greenhouse gas emissions produced by human activities in Canada in less than a decade.” And “both are ratcheting up the pressure on the Liberal government” ahead of the cabinet retreat.

But after months of analysis and advocacy placing investments in climate solutions as the cornerstone of a just, green recovery, multiple news reports are pointing to the wider context—with the pandemic still in full swing, case counts beginning to rise, and mounting concern about a second wave of infections. “While there have been indications lately that the government would use the speech to launch an aggressive environmental agenda, sources say the recent spike in COVID-19 cases across the country means the immediate focus will remain on the public health crisis and the economic challenges it has created,” CBC writes.

“We are still living in an emergency,” Prime Minister Justin Trudeau told media last Wednesday. “The last thing anyone wants is to have to once again shut down our economies and suspend our lives to try and counter a massive second wave.”

“That doesn’t mean the green agenda will be absent from the Throne Speech,” CBC says. “Cabinet is expected to deal with several environmental proposals” during the retreat, and “there will be a green component to many of the economic stimulus measures that will be rolled out in the coming months.” CBC says the speech will likely lay out plans to create jobs through energy-efficient home construction and retrofits, while outlining a longer-term “build back better” plan “in broad strokes”.

But the story cites two Liberal sources expressing concern “about being perceived by the public as focusing too heavily on a green agenda while parents are worried about sending their kids back to school and business owners are trying to hold on to what they have.”

“There’s a sensitivity to being perceived to hijack the moment for a green recovery,” one of the sources told the national broadcaster.

That means the primary emphasis in the Throne Speech will be on limiting the spread of the virus, sustaining the income supports and wage subsidies that have backstopped the economy through the pandemic, and “signalling the need for a long-term overhaul” of the employment insurance system, particularly for homeless people, gig workers, and self-employed Canadians. “Forty per cent of people who went on the [Canada Emergency Response Benefit] would not qualify for EI,” one official told CBC. “That’s something the federal government needs to fix.”

Over the last few days, news coverage has focused on the unequal impact of the pandemic across different segments of society, the importance of affordable child care as a cornerstone of any pandemic recovery, student interns’ right to a fair wage, and perpetual concerns about whether and how federal recovery investments will drive the national deficit.

The fossil industry, needless to say, is undeterred.

“Industry leaders have long sought to shake off claims that they are strictly polluters who need to be phased out in order to transition toward cleaner sources of energy,” the National Post reports. “The message has taken on heightened urgency in recent weeks, as some industry insiders worry that Ottawa could wield overly blunt tools as it unveils its ‘green recovery’ plans later this month.”

“It is essential the strengths and potential benefits of gas and oil investment are highlighted in the Speech from the Throne, as this will represent a crucial signal to Canadian and international investors,” Canadian Association of Petroleum Producers President Tim McMillan wrote in a letter to the Prime Minister’s Office last month.

“There is of course a concern that the importance of the industry is not recognized, and likewise that the ability of the industry to be a real partner in Canada’s climate ambitions is overlooked,” said Kevin Krausert, CEO of Calgary-based Beaver Drilling. “Anything from hydrogen to geothermal to ‘bitumen beyond combustion’ are areas the industry is very seriously and very heavily working on, and there are ways for the oil and gas sector to partner with government in the climate recovery.”

CAPP wants the Throne Speech to include “promises of tax credits and a rethink of a new Clean Fuel Standard, scheduled to take effect in 2022,” CP says. “McMillan said the industry wants to be part of the ‘ambitious green agenda’ Prime Minister Justin Trudeau has promised but it needs help. And he says the fuel standard will be too hard for many companies to meet.”

“In its current form, (it) will have the effect of shipping jobs and investment offshore and we’ll be importing a lot of the products that we probably do a better job of producing here in Canada,” McMillan said. CP notes that the CFS in its current form will require companies to reduce greenhouse gas emissions from liquid and gaseous fuels by just 2.6% in 2022, increasing to 13% by 2030—the year when the Intergovernmental Panel on Climate Change says countries around the world must cut all their emissions by 45%.

Pembina Institute senior analyst Bora Plumptre “said many other countries are pursuing similar policies, including in Europe and China, as well as some U.S. states,” CP writes. “He said scaling back the standard would make it impossible to hit our Paris agreement targets to slash greenhouse gas emissions, and will also drive investments away from the renewable fuels industry in Canada.”

While Natural Resources Minister Seamus O’Regan talks about technology investments to help fossils adhere to the CFS, climate campaigners have been amping up their argument that the industry shouldn’t be a part of the picture. Sustainabiliteens and Climate Strike Canada member Lilah Williamson told CP the Throne Speech is Trudeau’s “last chance to be a leader” on climate change, adding in a missive to the PM that “it’s up to you whether we will be protesting or celebrating” at the next climate strike scheduled for Friday, September 25.

An Ipsos Canada poll commissioned by the Business Council of Alberta found that 75% of Canadians believe the pandemic recovery “should support Canada’s natural resource industries while still protecting the environment,” the opinion research company reported Friday.