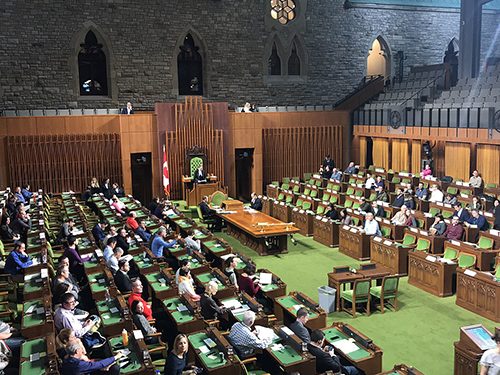 The COVID-19 pandemic and the climate crisis “require a robust and coordinated national response”, and elected parliaments must play a key role “by passing legislation, by approving national budgets, and by holding governments to account,” the speakers of the G7 parliaments declared Saturday, in a joint statement signed by the speaker of the Canadian House of Commons, Anthony Rota.

“Unfortunately, the climate crisis does not pause as governments address the pandemic,” the Group of Seven Speakers and Heads of Governments stated at the end of a virtual annual meeting convened by U.S. House Speaker Nancy Pelosi (D-CA). “Our nations cannot choose to ignore the climate emergency while we address the immediate crisis presented by the COVID-19 pandemic. Both the health and climate crises have and will continue to require unprecedented government action. As parliaments develop legislation to rebound from the economic crisis caused by the pandemic, clean energy and other climate investments can power short- and long-term economic recovery.”

Rota’s office did not reply to calls and emails asking for further comment on the statement, or on its implications for the Speech from the Throne coming up September 23.

The speakers note that the world is “reeling” from the pandemic, with more than 28 million confirmed cases and more than 900,000 deaths world-wide as of September 12. “The pandemic has disrupted the regular life of our citizens, disproportionately hurt our most vulnerable communities and at-risk populations, including women and children, and destabilized our economies,” they write. “We declare that our response to COVID-19, including vaccine development and its equitable distribution, will be based on science and medicine, focused on wide access rather than profitability, and informed by the knowledge that the pandemic will continue until it is addressed worldwide. As G7 nations, we have a moral, scientific, and economic duty to serve as the standard-bearer for this global commitment.”

But by the same token, “the climate crisis is the existential threat of our time, jeopardizing the health and well-being of every family in every community around the world. Atmospheric carbon dioxide concentrations in 2020 are among the highest averages ever recorded. The planet suffered through the second-hottest year ever in 2019. As the Earth heats up, climate-related impacts, including heat waves, hurricanes, wildfires, droughts, and flooding, are worsening. The great rivers of our world are beginning to dry up, depriving millions of water, food, jobs, transportation, and commerce. The degradation of the oceans is also a great matter of concern.”

The speakers affirm the “central role played by parliaments in democratic life”, and pledge to “pay particular attention to environmental justice for economically vulnerable and front-line communities. Committing to fight against environmental injustice requires providing a healthy environment, equal opportunity, and meaningful involvement in environmental decisions to all people, regardless of race, colour, gender, orientation, national origin, belief, or socio-economic condition. Climate policy can end the perpetuation of systemic inequalities.”