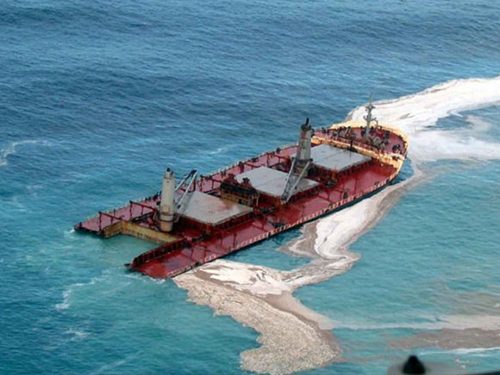 Two more disabled oil tankers are at risk of causing serious ecosystem damage, with a vessel in the Indian Ocean off Sri Lanka on fire with two million barrels of crude onboard and a storage tanker off Venezuela at risk of sinking.

Last month, Mauritius was facing a sustained ecological disaster affecting coral reefs, fish, and other marine life as satellite images showed a dark slick spreading toward sensitive wetlands. In the last week, a tanker carrying Kuwaiti crude to a refinery in India was ablaze, while U.S. sanctions blocked foreign vessels from unloading 1.1 million barrels of oil from a Venezuelan-flagged ship.

On Saturday, the New Diamond Very Large Crude Carrier (VLCC) was towed farther from the Sri Lankan coasts while rescuers continued working to bring the engine room fire under control, Bloomberg reports. Although the ship had developed a two-metre crack about 10 metres above the waterline, the Indian Coast Guard said no oil slick had been reported, while a senior navy official said the fire had been contained in the rear portion of the ship.

“The live flames have now died down and there is only white smoke emanating from the vessel,” said Rear-Admiral Y.N. Jayarathna, the navy’s director general of operations.

Reuters says one of the vessel’s 23 crew is presumed dead, and another was injured.

“While, there have been no reports of large-scale oil leakage, Sri Lankan authorities are deploying equipment to prevent pollution,” Bloomberg writes. “The area is south of a belt well known for whale sightings, and any oil spill could threaten marine life in the region.”

The chair of Sri Lanka’s Marine Environment Protection Authority, Dharshani Lahandapura, said any spill at all would be catastrophic for marine life. “It will be a huge environmental and economic disaster if this happens,” she told Reuters. On land, the news agency says the nearest town, Thirukovil, “was badly battered by the 2004 Indian Ocean tsunami,” and nearby Arugam Bay is a world-renowned surfing spot.

Venezuela, meanwhile, has been scrambling to secure the Nabarima floating storage unit in the face of U.S. sanctions, Bloomberg writes, citing an unnamed official. “The sanctions are scaring off foreign tankers from potentially taking the 1.1 million barrels of crude” off the ship, but “previous plans to unload the vessel over the past year have also been met with resistance from local workers because of the risks posed by the clashing currents of the Orinoco river and the Atlantic.”

The Nabarima was previously used to transfer light crude from Petrosucre, a joint venture between Petroleos de Venezuela (PDVSA) and Italian colossal fossil Eni SpA. Eni told Bloomberg the ship is “stable” and recent “water leaks” have been addressed, but said its emerging plan to unload the cargo still needs approval under U.S. sanctions, the news agency writes.

“Earlier this week, union leaders flagged the risk of a leak as Nabarima accumulated water over the oil tank line and machine room, while power generators and anti-fire systems were offline,” Bloomberg says. “If a spill should occur, it could reach international waters bordering Trinidad and Tobago, PDVSA workers said.”