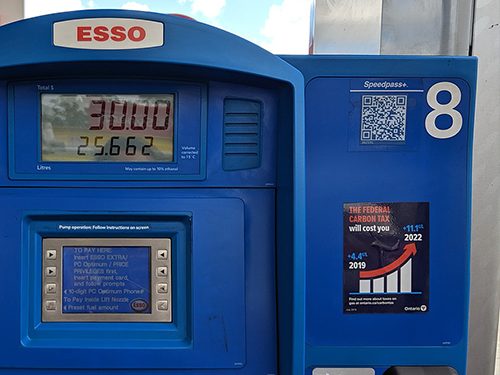 The Doug Ford government’s gas tank propaganda stickers against the federal floor price on carbon were an “unconstitutional attempt” to force private gas station operators to “stick it to” another order of government or political party, Justice Edward Morgan of the Ontario Superior Court ruled Friday.

He concluded that “the mandatory fuel pump sticker is an attempt to do just that,” adding that the message on the stickers amounted to “blatant advantage-seeking by a political party and a misuse of a governing party’s legislative power,” CBC reports.

“The stickers—which Energy Minister Greg Rickford at the time called a transparency measure—signalled to customers at 3,200 gas stations across the province that the federal carbon tax had added 4.4¢ per litre to the price of gas and would increase to 11¢ per litre by 2022,” CBC recalls. “Service station owners that didn’t display the stickers faced possible fines of up to C$10,000 per day.”

On Friday, Rickford said the province would respect the court decision, but took the opportunity to reiterate the propaganda message on the stickers. “The federal carbon tax makes life more unaffordable and hits the wallets of Ontario families and small businesses hardest when it comes to gas prices and home heating costs,” he said.

CBC says the Canadian Civil Liberties Association led the court challenge on free speech grounds. “CCLA is very pleased that the court recognized these stickers for what they are: an attempt to compel private entities to convey a government’s partisan political message,” said Cara Zwibel, director of the organization’s fundamental freedoms program.

The Battle Plan: Key Lessons from the Second World War for the Climate Mobilization (Part 1)