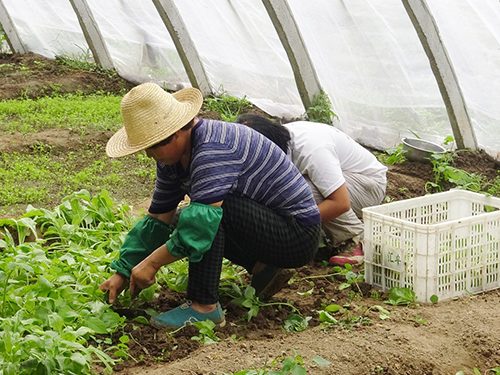 Sweltering in high-30s heat by mid-morning, choking on wildfire smoke, and terrified that the pandemic will bring illness, job loss, or both: such is the life of the migrant farm workers who even now labour to harvest the produce of the San Joaquin Valley in California.

“Geography and industry curse the valley with some of the country’s worst air. Rates of asthma and chronic obstructive pulmonary disease run high,” writes Somini Sengupta in the latest of a series of photo essays on the social effects of climate change, titled Inequality at the Boiling Point. Also prevalent among the farm workers of the valley: asthma, kidney disease, diabetes, and chronic obstructive pulmonary disease.

“Little wonder, then,” writes Sengupta, that COVID-19 infection rates in the region are among the highest in the state, with the Latinx population disproportionately represented.

Responding to the worsening air quality wrought by the fires, authorities have urged citizens not to spend time outdoors. But as Leonor Hernández, a mother of three, told the Times, that is not always possible: “If we stay indoors we don’t get paid,” she said.

That cruel reality bites down particularly hard on piece workers—the wine grape pickers, for example, who are typically paid by the bin.

Sengupta adds that while California (along with Washington State) does, in fact, require employers to provide shade and drinking water for outdoor workers, “the law doesn’t require a halt at any given temperature threshold.”

That legislators have remained silent on this crucial protective measure “is the price of cheap food,” said Armando Elenes, secretary-treasurer of the United Farm Workers of America (UFWA). Having led the push for the protections that now exist in California following the deaths of a number of farmworkers 15 years ago, the union originally founded in 1962 by César Chávez and Delores Huerta is now fighting to have the equivalent of California’s and Washington’s heat standards applied nationwide.

Meanwhile, farm workers like Hernández keep working, trying to stay focused on their dreams for a better life and education for their children. With the arrival of the pandemic, however, even this window of opportunity has grown slimmer, as physical schools are shuttered and remote learning is hobbled by ongoing power failures in the underserviced communities the migrants often call home.

Adding to all this, a final spectre haunts the lives of California’s farm workers: hunger. Organizations that provide services to agricultural workers are reporting twice as many people showing up during food distribution sessions as they have supplies to offer, writes Sengupta.