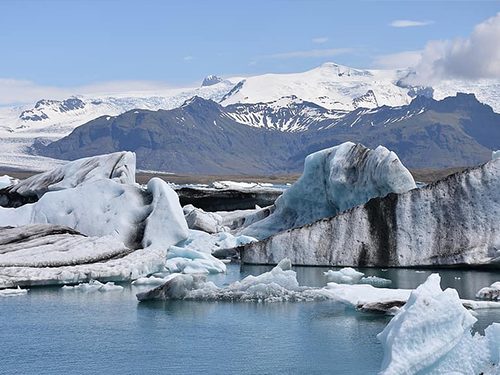 Researchers have recorded explosive growth in glacial lakes across the world over the past three decades—with climate change as a key driver. And as meltwater continues to pour into these basins, downstream communities and critical infrastructure are put increasingly at risk.

Using the latest modelling systems and more than 250,000 satellite photographs, an international group of climate scientists has discovered that glacier melt has led to an increase in the number, area, and volume of associated lakes over the period between 1990 and 2018, reports The Guardian.

Sharing their findings in the journal Nature Climate Change, scientists from the United Kingdom, the United States, and Canada say the number of these bone-chillingly cold bodies of water rose by 53%, while the total volume of meltwater increased by 48% over the nearly 30-year span.

Lakes in Iceland, Russia, and Scandinavia grew the quickest, more than doubling in area during the study period, says The Guardian. In its own reporting on the new study, the Canadian Press cited a doubling in the volume of glacial lakes in British Columbia and Yukon.

Report author Stephan Harrison, a professor of climate and environmental change at Exeter University, told The Guardian the recent findings demonstrate how the planet’s surface systems are responding very rapidly, and globally, to climate change. They also clarify how much meltwater is accumulating in the high mountain valleys of the world.

The growth of glacial lakes might well seem a good thing, observes The Guardian, noting that they are “an important source of fresh water for many of the world’s poorest people, particularly in the mountains of Asia and parts of South America.” But the burgeoning lakes also present a danger, as they can suddenly release their contents—in an event called a glacial lake outburst flood, or GLOF—in a devastating torrent of water that can smash into whatever lies below, whether that’s a community or major infrastructure, such as the many important supply lines that cross through Asia.

Particularly vulnerable to potential GLOFs, warned the researchers, is the Karakoram Highway, a vital supply and trade conduit—worth billions annually—that runs between China and Pakistan. Also high on the list: hydroelectric power plants in the Himalayas, and the Trans-Alaska Pipeline.

As for what has been driving the rapid expansion of these glacial lakes, Harrison and co-authors Dan Shugar and Richard Betts explain in a guest post for Carbon Brief that glacial lake development is “complex,” and some of the growth may be “due to natural climate variability.”

That caveat noted, however, the scientists agree that anthropogenic climate change is “the simplest explanation” for the trend, particularly given that the lakes are growing fastest in the rapidly melting latitudes of the high north—a fact that is “consistent with our understanding of Arctic amplification,” they write.