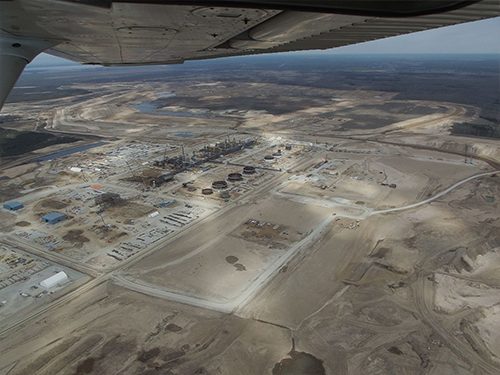 Imperial Oil’s Kearl Lake mine has gone into temporary shutdown, following a spill Saturday in a diluent pipeline that supplies the giant tar sands/oil sands facility north of Fort McMurray.

Inter Pipeline Ltd. closed the western segment of its 240,000-barrel-a-day Polaris system after detecting the diluent spill Saturday, Bloomberg reports. There’s no word on when the pipeline will be restarted.

“The diluent Polaris supplies to sites operated by Imperial and Husky Energy Inc. is mixed with the sticky bitumen they produce, so that it can be shipped by pipeline,” the news agency explains. The disruption “forced oil sands production to halt at a time producers are already struggling with weak margins and stretched balance sheets.”

Last month ExxonMobil, which owns 70% of Imperial Oil, referred specifically to Kearl Lake as a production site it might soon close down permanently as it scales back its previous US$30-billion-per-year rebuilding plan. “The company’s massive Kearl oil sands mine in Alberta was the only specific asset singled as a potential victim of any year-end revision,” Bloomberg wrote at the time.

In addition to Imperial and Husky, Bloomberg analysts say BP and Cenovus Energy could also be affected by the pipeline shutdown.

On Tuesday, an Alberta Energy Regulator spokesperson told Bloomberg that Inter Pipeline was working to dig up the line. “New booms have been deployed and wildlife containment measures taken,” the news agency writes. “The site is difficult to access but a helicopter and vehicles have reached the location.”