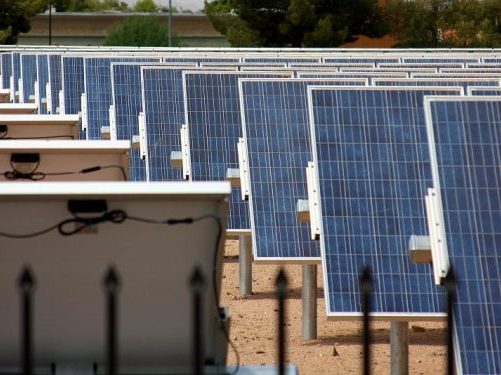 An initial two to four abandoned oil well sites in Taber, Alberta will be converted to host small solar arrays, in a bid to make productive use of the sites while long-term remediation is under way.

“According to a news release from RenuWell, the solar projects will generate 2,900 MWh and over $224,000 in electricity sales per year,” while saving 1,560 tonnes of carbon dioxide-equivalent, CBC reports. “The projects will also create an ongoing property tax revenue for the Municipal District of Taber.”

“The idea is to help accelerate and reduce the cost of abandonment in the area…and also to decrease some of the energy costs for irrigation farmers,” explained RenuWell Energy Solutions founder and president Keith Hirsche. He said the approach doesn’t differ much from a standard solar installation, but makes more efficient use of the space the projects require, using lands that already have access to roads and power lines.

“The best site locations are generally located on farmlands, where farmers can buy the power directly for their irrigation systems,” CBC writes, citing Hirsche. And the potential across Alberta’s 163,000 inactive and abandoned wells is huge: “If around 10% of abandoned wells around the province are utilized for solar projects, it could possibly meet the land resource requirements for 6,200 MW of solar energy development.”

Hirsche stressed the solar work won’t remove the obligation to clean up the abandoned wells. “It’s really important to make sure this isn’t another dumping ground for oil and gas liabilities,” he said.

CBC says Iron & Earth is working with Medicine Hat College on a five-day solar basics course for workers on their way into the project. The arrays will be installed by Canadian Solar Inc. and SkyFire Energy Inc., with Canadian Solar contributing up to C$700,000 in in-kind funding.