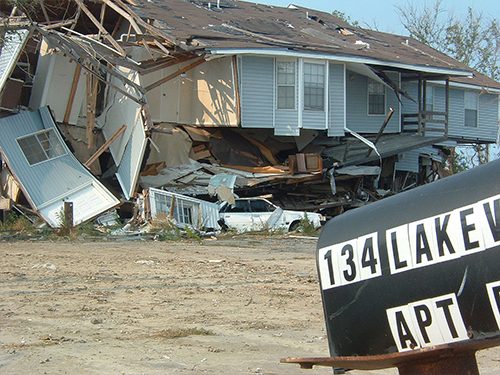 As the residents of Louisiana’s industry-heavy coast begin the long work of recovering from the devastation wrought by Hurricane Laura—and the highly toxic chemical fire it triggered—citizens are once again facing down one of the hard truths of a fossil economy: when a climate disaster strikes, marginalized communities get pummelled.

“While no one is safe when a hurricane strikes, poor and largely Black neighbourhoods often located near industrial sites are particularly vulnerable,” writes the New York Times. In the hours before Laura made landfall, media outlets across the continent predicted dire results, with Bloomberg forecasting “more than US$15 billion in insured losses”—all levelled on communities already in economic freefall from the pandemic. Anticipating as much as a $5-billion share of the losses, oil refineries along the coast raced to shutter their operations, including the Motiva refinery at Port Arthur, Texas, the largest oil refinery in North America.

Ultimately, the fossil industry was spared the brunt of the storm’s wrath. But others were not so lucky. The loss of life was relatively small. But in places like Lake Charles, Louisiana, the industrial city of 78,000 that received the worst of the hurricane’s blast, thousands are homeless, others are expected to be without power for weeks, and all are still living with the economic and social effects of the pandemic.

And then there are those living downwind and downstream from the chemical fire which erupted at Biolab Inc., a facility near Mossville, Louisiana that produces chemicals for chlorinated pools and spas. As the fire burned and the toxic smoke spread, the governor of Louisiana warned nearby residents—in an all-caps tweet, no less—to turn off their air conditioners and shelter indoors.

“The fenceline community is the one that’s bearing the burden of pollution and industrial encroachment,” said Dr. Robert Bullard, a professor of urban planning and environmental policy at Texas Southern University and co-chair of the National Black Environmental Justice Network. While of course many white people do get hurt when hurricanes roar ashore, he told the Times, “it’s almost predictable who will get the worst of it.”

The Biolab facility is “part of the toxic soup that Mossville residents have been exposed to for decades,” said Monique Harden, assistant director of law and policy at the Deep South Center for Environmental Justice in New Orleans. A 2015 report in the Intercept noted that Mossville has long been a casualty of industrial activity run amok, sharing its air, land, and water with “an oil refinery, several petrochemical plants, and one of the country’s largest concentrations of manufacturers of vinyl chloride, a main ingredient in polyvinyl chloride, the plastic known as PVC.” These facilities emit “millions of pounds of toxins into the air, water, and soil each year,” producing emissions that are “most often within permitted levels.”

The consequences are measurable and devastating, reported the Intercept. A hard-won effort by local activists to have residents screened for dioxin toxicity revealed that “the average dioxin level among the Mossville cohort was triple that of the general U.S. population,” with the median exceeding the nation’s 95th percentile.

In its own reporting on Mossville’s long struggle, the Washington Post describes how a small but determined contingent of local activists grew “loud enough to bring a team from the Environmental Protection Agency in 2011 to determine whether the area should be declared a Superfund site.”

President Barack Obama did—years later—act to strengthen regulations around chemical disasters and hazardous chemical disclosure, but the Trump administration has since stripped these protections away, happy to cave to “lobbying by a coalition of chemical and fossil fuel industry groups, who argued that the new rules would ‘impose costly and burdensome obligations on facilities’.”

Citing EPA estimates that the regulatory rollback “will save Americans roughly US$88 million per year,” the New York Times reports that the removal of “burdensome obligations on facilities” will also make it “more difficult for local communities, as well as emergency responders like firefighters, to know what hazardous chemicals are stored at local industrial sites.”

And such sites are many, with ExxonMobil and Motiva refineries, jet fuel factories, and chemical plants all stretching from Texas through Louisiana—along a coast regularly assailed by hurricanes that grow stronger by the year. But dire environmental consequences are accruing even in the absence of monster storms: according to EPA data, “over the past 10 years, the Biolab site has released more than 170,000 pounds of chlorine to the air, including 21,900 pounds last year,” reports the Times.

Yet before Hurricane Laura, more than 1,500 people lived within a three-mile radius of the plant. Out of that total, the Times notes, 30% are minorities, and “about a third of households earn less than $25,000 a year, half of Louisiana’s median household income.”

Mossville itself is steadily disappearing, the paper adds: Long before the hurricane made landfall, many residents decided to accept the buyout being offered by the Sasol Chemical plant, “which has been pursuing an $11-billion expansion”. Meanwhile, the 200-some residents who remain are “sick and tired of being sick and tired,” in the words of Michele Roberts, national co-coordinator of the Environmental Justice Health Alliance.

“This is these people’s everyday life,” said Roberts. “They live every day with the possible threat of sheltering in place. Every day.”

And that, she added, comes on top of the exhaustion of living with the pandemic. “I pray that someone hears what these community members are asking for—to be lifted up out of harm’s way and to be made whole.”