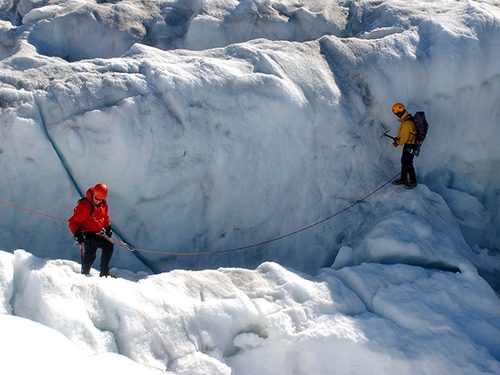 Pioneering climate scientist and glaciologist Konrad “Koni” Steffen died last month, after apparently falling into an ice crevasse and drowning during an expedition in western Greenland.

“With nearly 15,000 academic citations to his name, Steffen, who was 68 years old, dedicated his life to studying the rapidly melting ice sheets in Greenland and Antarctica,” CBS News reports. “Ironically, it was the perils created by melting around Swiss Camp in Greenland—a research outpost he founded in 1990—that claimed his life.”

During weather that was severe enough to be disorienting, Steffen “went beyond the safety perimeter in low visibility, windy conditions,” said his colleague Jason Box. “Koni fell into a water-based crevasse while the rest of us were working nearby, unaware. The last thing he said to us was he was going to look at data.”

The news came just days before a separate research team reported that the Greenland ice sheet has passed the point of no return, with annual snowfall now insufficient to replenish melting glaciers even if the climate cools.

“Glacier retreat has knocked the dynamics of the whole ice sheet into a constant state of loss,” said study co-author Ian Howat, a professor of earth sciences at Ohio State. “Even if the climate were to stay the same or even get a little colder, the ice sheet would still be losing mass.”

“It’s always a positive thing to learn more about glacier environments, because we can only improve our predictions for how rapidly things will change in the future,” added lead author Michalea King, a researcher at the Byrd Polar and Climate Research Centre at Ohio State University. “And that can only help us with adaptation and mitigation strategies. The more we know, the better we can prepare.

Shutting Most Coal, Gas Plants Could Save Southeastern U.S. $384 Billion by 2040