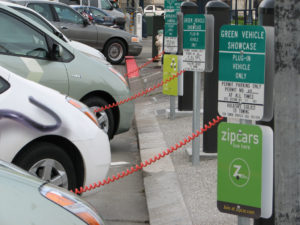 A new study in the journal Environmental Research Letters gets at the strange and vexing question of why some car owners in the United States go to the trouble of buying plug-in hybrid electric vehicles (PHEVs), then rarely if ever plug them in.

The issue has been getting more attention in recent weeks because PHEVs, which combine internal combustion and battery propulsion systems, are heavier than conventional cars. That means owners end up using more fuel and emitting more carbon than they would in a standard, internal combustion model if they don’t charge their batteries.

“It is often wrongly assumed that PHEV drivers plug in once per day,” write University of California Davis researchers Debapriya Chakraborty, Scott Hardman, and Gil Tal in their study abstract. But “using data from drivers of the vehicles we show this is not the case, and that some drivers rarely charge their PHEV. If the vehicle is not plugged in regularly, the vehicle will drive fewer electric miles and more gasoline miles, thereby losing out on potential emission savings.”

The study analysed 5,418 PHEV owners’ charging behaviour over a 30-day span and identified several determining factors, including vehicle characteristics and the availability and cost of charging at various locations.

“Higher home electricity prices, lower electric driving range, lower electric motor power to vehicle weight ratios, lower potential cost savings from charging, and living in an apartment or condo, among other factors, are related to not plugging in a PHEV,” they state.

The study found that disinterest in plugging in was most prevalent among owners of cars with battery range as low as 11 to 20 miles—beginning with the first-generation Toyota Prius Plug-In, which is no longer available in the U.S., and the Ford Energi, which will soon be withdrawn. But “this does not mean this behaviour and its effects will cease,” the authors warn, since the existing cars “will remain on the roads for many years,” and automakers are still introducing PHEVs with similarly limited battery range.

[As a reference point: At least one mid-range, all-electric model purchased more than 2½ years ago gets about 280 to 400 kilometres on a fully-charged battery, depending on time of year. Charging in a condo parking stall is easy, routine, and uneventful. Charging and vehicle maintenance charges are a very small fraction of what it would cost to own and operate an internal combustion car.—Ed.]

The findings matter because “PHEVs are part of many plans to decarbonize transport, and part of many automakers’ plans to comply with fuel economy and emissions standards,” the three authors note. “In many cases, PHEVs can electrify households that otherwise will not buy a BEV [battery-electric vehicle]. However, if they are not plugged in, their real-world emissions can be substantially higher than what is projected.”

That means “policies need to be designed to prevent non-charging behaviour from occurring among all PHEV owners,” particularly because “the purchase and use of PHEVs are being subsidized by state and federal funding, and some fuel economy regulations incentivize automakers to produce the vehicles.”