Even in Green California, Wealthy Communities Push Back Against Densification 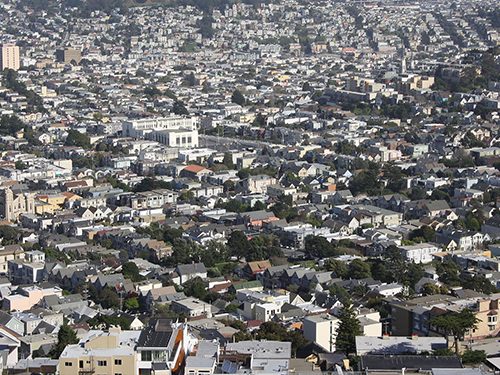 U.S. efforts to build denser cities are facing pushback, and not just from Donald Trump—with even committed green residents of California seemingly unmoved by the profound inequities and climate harms inherent in the American dream of house-yard-garage.

“Local codes have ensured that suburban homes with a two-car garage dominate the American landscape, but those rules originally were often directly linked to racial discrimination,” writes the non-profit media agency. “Single-family zoning was passed in some cities to ensure racial segregation. The deeds of some houses specified that only white buyers could purchase them.”

With the ensuing sprawl (and not a corner store in sight) came cars and highways—and, along with them, a major chunk of the climate crisis. Now, the solution requires a move in the opposite direction: “reshaping neighbourhoods with a new focus on public transit, biking, and walkability.”

With such imperatives in mind, jurisdictions like Minneapolis and Oregon have taken action, recently passing new “upzoning” codes that will allow for more efficient residential land use, such as duplexes or triplexes, while encouraging “denser development around transit and jobs.”

Similar efforts in California, however, are foundering, with “fierce” resistance being mounted by citizens who see no disconnect between disowning plastic straws and refusing to allow a triplex on their local street. The state has seen three bids to upzone blocked, with a fourth attempt now under way.

One of the citizens attempting to prevent increased density in California is community organizer Susan Kirsch, proud owner of a million-dollar single-family home in Mill Valley that is covered with solar panels and has a Prius quietly charging in its driveway. “I think climate change is one of the real serious issues that we have to deal with,” Kirsch told NPR. “But I don’t think we need to be forcing draconian measures, taking away local control and local preferences, to be able to solve that problem.”

Overruling such “local preferences” is precisely what the proposed zoning laws are designed to do, with an eye to the well-being of people and climate that extends beyond the self-interest of a privileged few.

“Kirsch’s neighbourhood is exactly the kind targeted for zoning change,” explains NPR. “In a state bill proposed last year, single-family zoning in places such as Mill Valley would be opened up to duplexes, triplexes, and fourplexes. In larger counties, areas within a quarter-mile of transit and jobs would have no limit on the number of units in the hope of boosting the housing supply and encouraging public transit use.”

Democratic state senator Scott Wiener, who introduced the latest bill, said both climate change and an ongoing housing crisis have been receiving short shrift in his state. “So we need to rebalance the state vs. local decision-making here,” he told NPR.

For Ethan Elkind, director of the climate program at the University of California, Berkeley law school, attitudes like Kirsch’s speak to abiding hypocrisy and latent bigotry.

“I think the lesson for the rest of the country is that even in California’s liberal suburban enclaves, with Black Lives Matter signs everywhere, residents and local elected officials are still hostile to opening their communities up to housing that would bring people with diverse backgrounds and incomes,” he said.

Such resistance to zoning changes means people from poor or minority communities can be “locked in” to housing policies that themselves lock in poverty and pollution, said Alvaro Sanchez, director of environmental equity with the Greenlining Institute, a racial and economic justice group in Oakland. While racial discrimination pervades housing policy, he explained, the problem is often veiled.

Even when density is green-lit, warned Sanchez, racial equity does not always follow—the risk of gentrification and displacement always lurks on the other side of the coin. To counter that risk, he stressed, cities and states need “strong affordable housing policies and tenant protections, as well as ensuring that communities of colour are directly part of the planning process.”