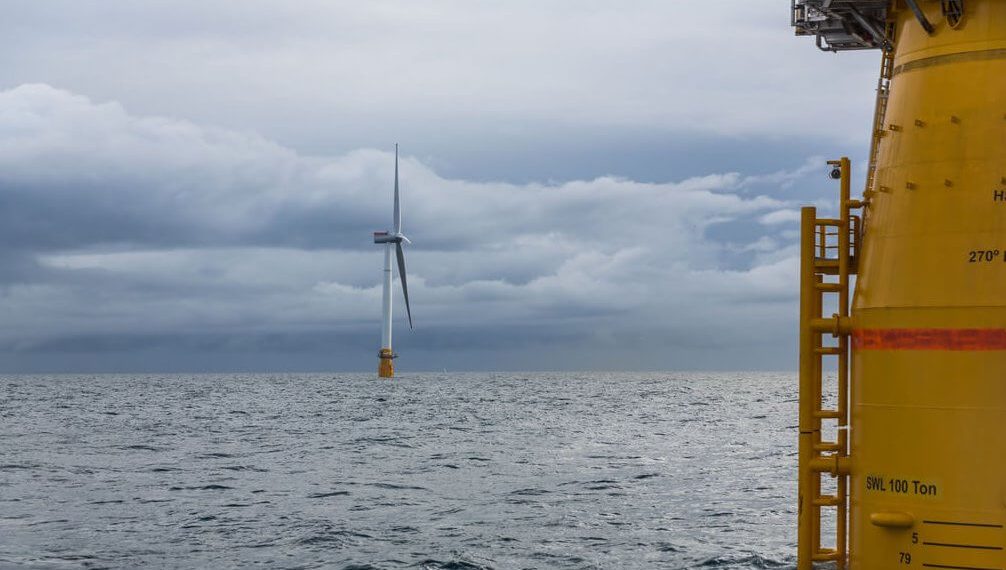 The Hywind floating wind farm off the coast of Scotland. Image: By Øyvind_Gravås/© Equinor

The global offshore wind industry is booming, rapidly growing in size and earning vastly more across the globe.

Although this already makes it the fastest-growing industry in the world, it seems likely to be only the start of an extraordinary boom in a business that is still improving its technology, and because of that the prices for the electricity it produces are tumbling.

Europe was a pioneer of the industry, since its many square kilometres of shallow sea in the continental shelf meant there were many locations ideal for driving piles into the seabed to anchor the turbines, which happily were close to markets in major coastal cities.

As the technology has improved, so the size of the turbines being installed has increased, now reaching 10 megawatts (MW) and heading soon for 12.

And as the turbines have grown bigger, the cost of the electricity they produce has come down, and offshore farms now not only compete with fossil fuels but are far cheaper than nuclear energy. The Far East, China and Taiwan have already become huge markets, and the US is beginning to invest heavily too.

Designs by the US National Renewable Energy Laboratory are already available for 15 to 20MW turbines. These will be 150 metres high, with rotor diameters of 240m, longer than two football pitches.

The extraordinary size of these models allows them to take advantage of the higher and more constant wind speeds available further out to sea, which provides a more reliable output.

While the boom in wind farms fixed to the seabed develops, a new surge is also expected in floating farms. These use what are basically identical turbines mounted on rafts anchored by cables to the seabed, allowing them to operate in much deeper water.

Floating wind farms have already been in operation and have exceeded output expectations, but like all prototypes they were expensive. As with all successful renewable energy technologies, though, the price of installation and operation will continue to fall as the industry gains experience and confidence.

Only 20 years ago turbines producing 3MW of electricity were considered giants. Today’s engineers are already considering whether models able to generate more than 20MW are feasible.

The International Energy Agency said in 2019 that the European Union (then including the UK), the US, Japan, India and even China had enough offshore wind potential to cover all their electricity needs. That was before the latest designs for even bigger turbines had been unveiled.

Its report said: “Today’s offshore wind market doesn’t even come close to tapping the full potential – with high-quality resources available in most major markets, offshore wind has the potential to generate more than 420,000 TWh per year worldwide. This is more than 18 times global electricity demand today.” − Climate News Network