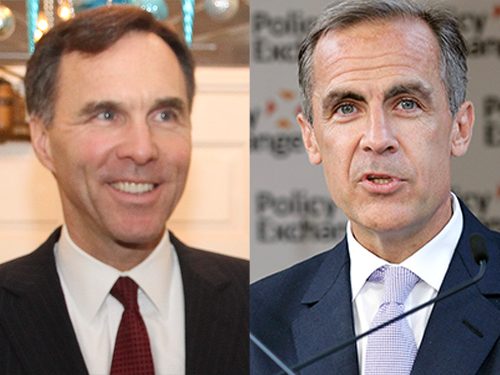 Summer speculation was swirling in Ottawa this week with the news that former Bank of Canada governor Mark Carney is back in the country and advising the federal government on next steps in its economic recovery plan. Carney’s arrival coincided with persistent rumours that Finance Minister Bill Morneau may soon be out of a job, though Prime Minister Justin Trudeau went out of his way yesterday to express confidence in Morneau.

While there is very little certainty about where the elements of the story will land, the variables include a sitting cabinet minister whose department has been seen as a powerful obstacle to a green recovery, and a highly-respected central banker who has emerged as a global advocate on climate finance and risk disclosure.

Bloomberg News got the ball rolling Monday with the report that Carney, “the only person to run two major central banks,” had been tapped alongside Canada Infrastructure Bank Chair Michael Sabia to help the government chart a course out of the pandemic-induced recession.

“Trudeau is leaning on the former Goldman Sachs banker [referring to Carney] as a sounding board for what officials are characterizing as an ambitious economic recovery plan,” Bloomberg wrote, citing a source familiar with internal government policy operations. “The plan will seek to tackle everything from deficiencies in the social safety net to climate change, infrastructure, and immigration.”

The official said initial phases of the plan will likely show up in a budget update this fall, with a more comprehensive fiscal package to follow early in the new year.

“The growing roles of Carney and Sabia represent an effort by Trudeau to broaden his pool of advisers,” Bloomberg said. “Trudeau’s group of core decision-makers during the crisis has been small—confined primarily to his own staff, plus Deputy Prime Minister Chrystia Freeland, Morneau and their close officials.” But now, “Environment Minister Jonathan Wilkinson and Infrastructure Minister Catherine McKenna are being more active in devising an infrastructure spending package. Innovation Minister Navdeep Bains is poised to deliver plans on shoring up industries facing long-term damage form the pandemic, as well as measures to help sectors deemed strategic for the nation’s economy. Immigration, day care, and unemployment insurance are among other issues top of mind for the government.”

Carney, who also signed on late last year as UN special envoy on climate action and finance, “has long been rumoured to have political aspirations since returning to Canada after his term with the Bank of England expired earlier this year,” CBC wrote. “Many in Liberal circles see Carney as a top candidate for finance minister should he seek office or as a possible leadership candidate to eventually succeed Trudeau.” And after incumbent MP Michael Levitt in the Toronto-area riding of York Centre resigned earlier this month, “there have been rumours that Carney could be a candidate in an upcoming byelection, though senior Liberal sources have repeatedly thrown cold water on that idea.”

The latest round of speculation about Carney also comes at a time when Morneau is vulnerable, under fire for his part in the WE Charity and apparently at odds with Trudeau over key components of the government’s pandemic response. “Prime Minister Justin Trudeau is not committed to keeping Bill Morneau on as the key architect of the federal government’s economic revival plan after the two men clashed over the Finance Department’s policy responses to the COVID-19 crisis,” veteran Globe and Mail journalist Robert Fife reported Monday. The two apparently disagreed on plans to shift the Canada Emergency Response Benefit into an overhauled Employment Insurance program, and had distinctly different ideas on the size of the coronavirus wage subsidy—Morneau wanted to cap it at 10%, Trudeau at 75%.

“Beyond the policy disputes, sources say Mr. Morneau had failed to tell anyone in government, including his top aides, that he and his family had taken trips to Kenya and Ecuador in 2017 to see some of WE’s humanitarian work for which the charity covered some expenses,” Fife wrote.

Now, “insiders say Mr. Trudeau is uncertain whether Mr. Morneau is the right fit to navigate the country into a post-pandemic economic recovery as he decides on a cabinet remake before the fall session of Parliament.”

It was during the pandemic lockdown that Trudeau began relying on the Fort Smith, Northwest Territories-born Carney for informal policy advice, Fife said. “Sources did not deny that Mr. Carney could replace Mr. Morneau if he is interested in the finance minister’s job, although he would need to win a seat in Parliament,” he added. “Mr. Morneau has privately said he would leave politics early if he could not keep the high-profile job, insiders say. However, the Finance Minister’s office said Mr. Morneau has no plans to leave politics and is engaged in reviving the economy.”

In the National Post, columnist John Ivison chronicled the “particularly juicy scuttlebutt” circulating through Ottawa earlier in the week, as the “utterly imaginary ascended to the level of sure thing”. With Levitt retiring from the House of Commons just as Carney was returning home, “wishful speculation swirled that he was buying a house in the ritzy Forest Hill neighbourhood of Toronto, as preparation for the York Centre byelection. The reality is understood to be more prosaic—he is abiding by the 14-day isolation period at a friend’s house in the city.”

And while Carney is widely believed to have electoral ambitions, he deftly deflated the last round of serious speculation that he might enter politics in 2012. “Why don’t I become a circus clown?” he asked reporters. “I have gainful employment and I intend to continue it.” Just six weeks later, he left the Bank of Canada for his subsequent post at the Bank of England.

Still, the speculation about Morneau has been persistent enough to produce jitters among financial analysts, Reuters wrote Tuesday. “The bus has been rolling toward Mr. Morneau for weeks,” and “market participants understand that he has become a major political liability,” said Karl Schamotta, chief market strategist at Cambridge Global Payments. But even so, “rocking the canoe might increase downside risk for the Loonie [the Canadian dollar], and for markets more generally. And a distracted government is the last thing the economy needs.”

Those concerns prompted Trudeau to take the “unusual step” of issuing a statement expressing his full confidence in his minister, the Canadian Press later reported. But on Wednesday morning, Globe and Mail columnist Campbell Clark noted the government took its time getting the clarification out.

“Facing queries, the Prime Minister’s Office didn’t rush out the usual statement about the PM having confidence in his minister—the kind routinely issued even up to the eve of a sacking—until 2 PM,” he wrote. “At midday, the Reuters business wire was running a story saying the PMO told them they’d get back to them on that.”

When the statement finally appeared, it did not say Morneau would still be in his job six weeks from now, Clark added, and “there was no gainsaying the point reported in The Globe and Mail earlier on Tuesday morning: The PM isn’t sure he’s going to keep Mr. Morneau as Finance Minister.” The net result: “Canada’s Finance Minister is twisting in the wind.”

The other, related layer of speculation has to do with the government’s commitment to a green and just recovery, the overlapping pressures it faces to deal with the gendered aspects of the recession, and the government’s financial capacity to do both—particularly under the guiding hand of a finance minister with a reputation for reining in his cabinet colleagues’ more ambitious spending plans. With the European Union confirming green strings on a €1.75-trillion recovery plan and budget, and presumptive Democratic nominee Joe Biden adding a US$2-trillion climate plan to his campaign platform, analysts say Canada runs a real risk of being left behind.

“If we’re caught flat-footed by a Biden victory, we may watch as entire sectors of our growing clean energy and cleantech sectors pack up and move to greener pastures in the U.S.,” Environmental Defence Executive Director Tim Gray warned earlier this month. “Or they may just wither as they fail to secure the government support needed to commercialize innovations,” producing a “nightmare” for cleantech businesses or business potential in southern Ontario, British Columbia, and Alberta.

“To match the level of ambition in the EU and Biden plans, we should be spending in the hundreds of billions, not just billions in the single digits. We are currently off by orders of magnitude when it comes to what it will take to both rebound our economy and address the climate crisis,” Broadbent Institute Executive Director Rick Smith added this week, in a post for Corporate Knights.

“This matters not just because we desperately need to get our climate house in order, but also because weak ambition could be very costly,” Smith said, with the EU considering a border carbon tax and restrictions on agricultural products that aren’t sustainably produced. Moreover, the EU and Biden plans “are exactly what is needed if we want to see our economies grow rather than shrink.”

Which means that “this is a case where modest Canadian incrementalism simply isn’t going to cut it. We need to be bold. And green.”