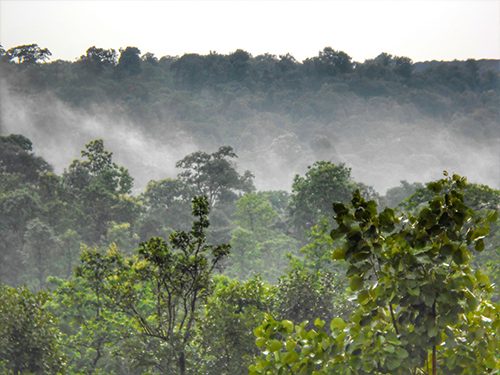 India’s plan to boost an economy ravaged by the COVID-19 pandemic and reduce its dependence on expensive coal imports is producing a moment of deep peril for the Hasdeo Arand, a biodiverse, ecologically sensitive forest in the state of Chhattisgarh, as the government of Prime Minister Narendra Modi sets its sights on the five billion tonnes of coal beneath the surface.

“The coal industry in India is state-owned, but this auction of 40 new coal blocks will see the creation of a privatized, commercial coal sector in India,” The Guardian reports. “Among those bidding for it are India’s rich and powerful industrial giants, including the $14-billion Adani Group run by the Indian billionaire Gautam Adani, who operates India’s largest coal power plants and has close ties to Modi.”

The process of auctioning off the coal blocks “has pitted Indigenous people, ancient trees, elephants, and sloths against the might of bulldozers, trucks, and hydraulic jacks,” and “has already proved controversial at both the local and political level,” the paper adds. “At least seven of the coal blocks up for auction were previously deemed ‘no-go’ areas for mining due to their environmentally valuable status, and about 80% of the blocks are home to Indigenous communities and thick forest cover.”

The governments of Chhattisgarh and three other states have signalled their opposition to the project, and a block that overlaps a tiger reserve in Maharashtra has been taken out of the auction.

“If the government gave me the option to give up my life in exchange for no more mining happening in the forest, I would do it in a second,” said Amra, one of nine Indigenous village leaders who recently wrote to Modi with a demand that he stop the auction.

“If more mining happens everything will change; the natural resources will be gone, our way of life will disappear, everything will be under threat,” he told The Guardian. “We are tribal people, we cannot go out and live in the cities, and no amount of money can ever compensate us. There is no forest like this in the world. Cut it down and it can never be replaced.”

While United Nations Secretary General António Guterres recently said there is “no good reason for any country to include coal” in a post-pandemic recovery plan, Modi seems set on making India the world’s biggest exporter of the most polluting fossil fuel. “Yet with its 45% ash content, making it some of the most polluting coal in the world, there is unlikely to be an international market for Indian coal,” The Guardian says. For that same reason, domestic factories that run on coal would still have to import a cleaner product from elsewhere.

The move on Hasdeo Arand comes at a time when the pandemic is expected to drive down the country’s electricity demand more than 15% over the next five years, and state-run mines already have enough capacity to produce 20% more coal than the country will need through 2030, the UK-based paper adds. Modi himself inaugurated Asia’s biggest solar farm in Madhya Pradesh earlier this month, and environmental campaigners say the country could abandon coal completely by gradually increasing investment in domestic renewables, producing 1.6 million jobs by 2022.

But India’s joint secretary for coal, Maddirala Nagaraju, maintains domestic coal mining is the cheapest way to meet the country’s energy needs. “We are the country with the fourth-largest coal reserves in the world, and we need to provide energy security for over a billion people: coal is the only way,” he said. “Yes, some people have objected, but the mining will bring a lot of development, employment, and money to these areas. How else will we develop these Adivasi [Indigenous] people in central India?”

The Guardian has the full story here.