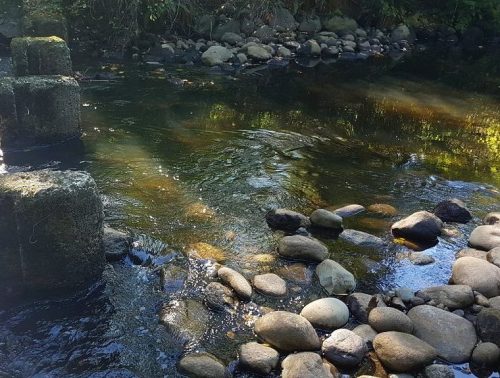 More than 200 people signed up for a series of socially-distanced, small-group weekend tours of a conservation area in British Columbia, followed by a round of “know-your-rights training”, as campaign organizations prepared for a critical six weeks in their bid to halt construction of the Trans Mountain pipeline expansion.

The stretch of land along the border between Burnaby and New Westminster is “where Trans Mountain is planning to clear trees near the Brunette River in Burnaby,” Protect the Inlet: Kwekwecnewtxw writes in a release,” and if that work “is not conducted within a federally-mandated six-week window running from now until mid-September, the project could be delayed by a full year. The area is home to eight species-at-risk, including coho salmon and nooksack dace.”

It’s an area local residents have worked decades to restore, the release says, and has been under consideration for inclusion in a city park. “Residents of the Lower Mainland treasure the Brunette River and have worked hard to bring salmon back to its waters,” said Wilderness Committee climate campaigner Peter McCartney. “This community is not about to let a pipeline company put it at risk.”

The tours include a visit to the treetop camp where public health physician Tim Takaro, who’s been studying the impacts of climate change for three decades, has been protesting the pipeline since August 2.

“I didn’t expect to find myself living in a tree at 63 years of age,” he said. But “this threat has compelled me to put my body on the line to prevent construction of this climate-killing project.”

“In choosing civil disobedience to block construction of TMX, I am choosing a far lesser crime than that perpetrated by Prime Minister (Justin) Trudeau, who continues to back this project,” Takaro added. “In addition to the direct health risks of the project, I am considering the future of my children, their children, and future generations around the world. No short-term economic benefit can outweigh this risk.”

The Protect the Inlet: Kwekwecnewtxw release notes that project delays are already beginning to mount up for Trans Mountain, with the pipeline falling months behind on most of its major milestones in B.C. “Pipeline construction is like dominoes,” said Dogwood Campaigns Manager Alexandra Woodsworth. “Everything needs to happen in order or the whole thing gets delayed, piling on even more costs to the taxpayer. It’s time to cancel this boondoggle and redirect those funds to clean energy projects that can build a more resilient future.”

“This pipeline was originally supposed to be in the ground by 2017,” added Watch House Guardian Will George. “We’ll be here to do what it takes to keep these trees standing, and stop Trans Mountain from threatening our Indigenous ways of life, local ecosystems, and the global climate.”