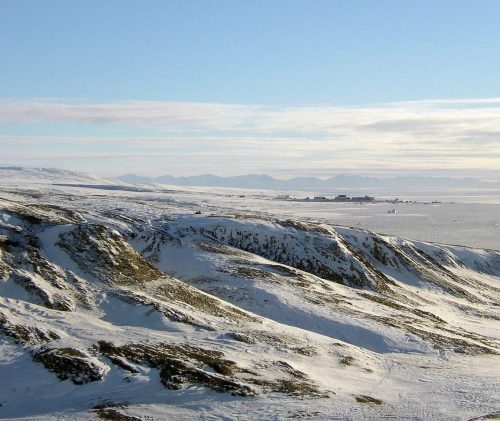 The Milne Ice Shelf on Ellesmere Island, the last fully intact ice shelf in the Canadian Arctic, has collapsed, after losing 40% of its area over a two-day span at the end of July, Reuters reports.

“Entire cities are that size,” he added. “These are big pieces of ice.”

In an early August tweet, the Canadian Ice Service said the collapse produced a 79-square-kilometre ice island, explaining that “above-normal air temperatures, offshore winds, and open water in front of the ice shelf are all part of the recipe for ice shelf break up.”

By comparison, Reuters says the island of Manhattan in New York takes up about 60 kilometres.

“The Arctic has been warming at twice the global rate for the last 30 years, due to a process known as Arctic amplification,” the news agency writes. “But this year, temperatures in the polar region have been intense. The polar sea ice hit its lowest extent for July in 40 years. Record heat and wildfires have scorched Siberian Russia.”

Copland told Reuters the Canadian Arctic summer this year has been 5.0°C above the 30-year average, endangering smaller ice caps that don’t have the bulk of larger glaciers. “The very small ones, we’re losing them dramatically,” he said. “You feel like you’re on a sinking island chasing these features, and these are large features. It’s not as if it’s a little tiny patch of ice you find in your garden.”

Reuters’ full coverage refers to a total of five Ellesmere Island ice caps that have already disappeared or are expected to in the next decade, while Broadview has a longer read on rapid permafrost loss in the western Arctic and its potential to turn local residents into Canada’s first climate refugees.