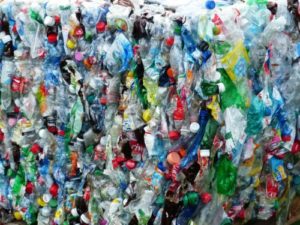 Recent efforts by Big Oil to secure the legal right to expand so-called “chemical” recycling of plastics throughout the United States are being condemned by environmental activists as a (literally) poisonous shell game designed to keep fossils in business.

Citing a recent analysis by the Global Alliance for Incineration Alternatives (GAIA), Grist notes that even as humanity’s plastic pollution crisis “threatens near permanent contamination of the natural environment,” fossils are lobbying for state-level legislation that allows for “chemical” or “advanced” recycling be taken nation-wide.

That would be an ill wind both for the country and its citizens, writes Grist, noting that the “recycling” process now being promoted by companies like ExxonMobil and Dow Chemical is nothing of the sort—it’s really just a way to turn plastic back into oil and gas for burning. But undaunted by externalities like the climate crisis and already lethal levels of air and water pollution, “policy-makers have taken note, and bills easing regulations on chemical recycling facilities have already been passed in eight states and introduced in at least five more.”

Denise Patel, the group’s program director for the United States and Canada, urged policy-makers “not be misled by the false promise of ‘chemical recycling,’ especially from the same industry that plans on quadrupling plastic production by 2050.”

As for the American Chemistry Council’s claim that its “plastic-to-fuel” process will “contribute significantly to a circular economy,” GAIA responded: “This is not recycling. It is an expensive and complicated way to burn fossil fuels.”

That strategy is part of an “aggressive pivot to plastic production” by the fossil industry, writes Grist. In anticipation of a “long-term decline in demand for gasoline, many oil and gas companies have turned to plastic as a lifeline, with plans to invest more than US$164 billion by 2023 to increase their production capacity.”

That’s more than “35 times the amount that plastic industry affiliates say has been invested in so-called ‘chemical recycling,’” the online daily adds. Though it’s been relatively insignificant to the fossils’ survival narrative so far, the push for chemical recycling constitutes a perilous and untimely distraction from the urgent task of curbing plastic pollution, beginning with a global ban on single-use and superfluous plastic.

Chemical recycling, especially of the plastics-to-fuel variety, is also harrowingly toxic, Grist says, citing GAIA’s finding that “a slurry of harmful substances,” including carcinogenic dioxins and myriad VOCs, “is released at every step of the chemical recycling process, creating a significant hazard to human health.” Such hazards are already well-documented, with Louisiana’s pollution-plagued St. James Parish as one prominent example. Dubbed “cancer alley,” the parish is the recipient of much of the nation’s chemical effluent, including plastics-to-fuel products from a chemical recycling facility in Tigard, Oregon.

In its own statement rebuking fossil efforts to push policy-makers to accept the toxic burden of plastics-to-oil recycling, the Association of Mission-Based Recyclers (AMBR) urged an acceleration of “upstream interventions to prevent a glut of plastic from being produced in the first place.” “The sad truth is that 30 years of plastics recycling in the U.S. have failed to significantly stem the tide of plastic waste,” the group said.

Another report in 2017 found that 91% of the “billions of tons of plastic produced in the past few decades has not been recycled,” Grist writes.