Bigger cars make bigger profits, but only for a few 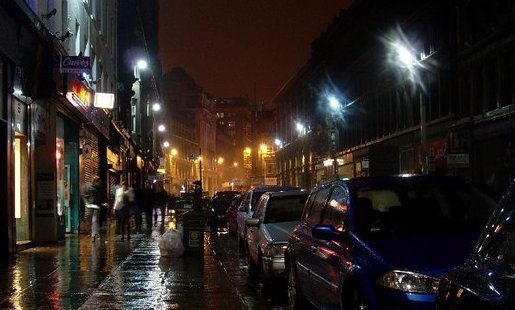 There’s high demand for parking on a wet evening in central Glasgow. Image: By Stephen Sweeney

LONDON, 3 August, 2020 − Increasing sales of more fuel-hungry and bigger cars are putting vital climate goals out of reach and causing many more deaths from pollution.

Although the trend to larger vehicles is most marked in the United Kingdom it is a global problem and one of the leading causes of increased carbon dioxide emissions, more damaging than both aviation and heavy industry. It also adds to poor air qality, which kills up to half a million people a year in Europe, and many more elsewhere.

The rise of so-called Chelsea Tractors, large, four-wheel drive vehicles used in towns and cities for ordinary domestic purposes, is being fuelled by manufacturers who make more profit from them than from smaller models.

These sports utility vehicles (SUVs), which are designed for off-road driving and so cause extra congestion in urban areas, now make up 40% of new cars sold in the UK. In 2019 this meant that over 150,000 new cars were sold which were too big to fit in a standard parking space.

To try to curb sales, two groups have launched a campaign aimed at securing a ban on advertising such vehicles. A thinktank, the New Weather Institute, and a climate charity, Possible, propose that advertising for the “dirtiest third” of new cars being sold − primarily SUVs − should be banned by law.

“There are adverts, and then there are badverts. Promoting the biggest, worst-emitting SUVs is like upselling pollution, and we need to stop”

They say in a report that the big car brands appear to be disproportionately promoting larger, more polluting SUVs because of the higher profit margins these vehicles provide.

The groups also make the point that tobacco advertising was banned when people grasped the damage smoking caused to public health, so the same standards should apply to harmful vehicles.

The report says the Land Rover company is among the worst offenders, with four models among the top ten vehicles for carbon dioxide emissions, selling altogether more than 60,000 cars in 2019. Other makers named are Mercedes-Benz, BMW, Audi, and Jaguar. All except Jaguar also make the list for the longest vehicles, with Volvo and Ford also having models in this category.

Andrew Simms, co-director of the New Weather Institute, said: “We ended tobacco advertising when we understood the threat from smoking to public health.

“Now that we know the human health and climate damage done by car pollution, it’s time to stop adverts making the problem worse. In a pandemic-prone world, people need clean air and more space on town and city streets.

“There are adverts, and then there are badverts. Promoting the biggest, worst-emitting SUVs is like upselling pollution, and we need to stop. In a climate emergency, when we need to make the places where we live more people-friendly, SUVs are in the way of progress.”

The report comes at a time when local authorities in the UK are creating wider pavements and new cycle lanes to allow commuters to maintain a safe distance apart and to get to work without using public transport.

It is also now clear that the air pollution caused by vehicles such as Chelsea Tractors may lead to increased deaths from Covid-19.

Robbie Gillett, campaigner at Possible, said: “Whilst millions of us are trying to reduce our carbon footprints to tackle the climate crisis, we have a multi-billion pound car and advertising industry aggressively marketing highly-polluting vehicles − many of which are literally too big for UK streets.

“Their misleading ads promise us freedom and escape − but the reality of urban road conditions is grinding traffic jams, toxic air pollution and spiralling carbon emissions from road transport that will trash our climate goals. Let’s create space to breathe and space to think − free from the advertising pressures of big polluters.”

The government’s statutory advisors, the Committee on Climate Change, has recommended that by 2030 the sales of all new cars with internal combustion engines should be phased out.

With the precedent of the ban on tobacco advertising, Possible and the New Weather Institute are urging the government to introduce legislation to outlaw advertising for the dirtiest new cars sold in the UK, as well as advertising for any cars which are too large for a standard UK parking space.

They have launched a petition to raise support for the proposal, and have produced an online toolkit for activists and policymakers wanting to act against such advertising at local level, to stop adverts fuelling the climate emergency. − Climate News Network