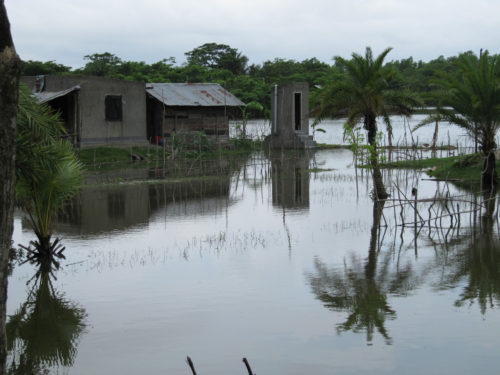 Hundreds of people are dead and millions have been affected as Bangladesh faces its longest period of monsoon flooding in decades, while South Asia simultaneously scrambles to recover from a cyclone that itself arrived on the heels of the coronavirus pandemic.

When Cyclone Amphan first hit in mid-May, local news reports had more than three million people evacuated in Bangladesh and India, with emergency operations complicated in a region already scrambling to cope with the pandemic. Nearly 2½ months later, “550 people have been killed and 9.6 million affected by the disaster in Bangladesh, Nepal, and northeastern India, according to the International Federation of the Red Cross and Red Crescent,” The Guardian reports.

One-third of Bangladesh is underwater, “with heavy rains set to continue until the end of July,” the paper adds in a July 24 dispatch. “The UN has estimated that this flooding could be the most protracted since 1988.”

The country was better prepared for flooding than it has been in the past, said Rezaul Karim Chowdhury, executive director of Bangladeshi NGO Coast. But “populations in flooded areas might end up in dire need because of a combination of existing localized and national crises,” The Guardian writes. “Incomes had already been hit by the government’s closure of 25 state-owned jute mills, mostly in northern areas that have been flooded, and by the COVID-19 pandemic.”

“The country has been locked down for four months and that has had a serious impact,” Chowdhury said. “Forty per cent of rural income was coming from urban areas, and then suddenly labourers and rickshaw pullers weren’t sending money home.” As a result, “almost a third of the population has dropped under the poverty line. This will have an impact on food security and purchasing power. This is a critical situation we have to overcome.”

The news report details the steps the United Nations has taken to help mitigate the impacts of flooding, using data and analytics to predict where emergency response and support will be needed most. That included US$5.2 million in emergency relief funds “in the form of cash, hygiene, and health kits, and equipment to protect farmers’ materials from water damage,” The Guardian writes.

“Doing something before crises hit can save more lives and costs less money. Plus it’s far more dignified for the people we’re helping,” said Mark Lowcock, the UN’s under-secretary-general for humanitarian affairs and emergency relief coordinator. “If we know a flood is about to hit, why wouldn’t we give river communities the means to get themselves, their livestock, and their tools out of harm’s way before the deluge comes, instead of waiting until they’ve lost everything, then try and help?”

But while the monsoon is essential to life in Bangladesh, Sheikh Rokon, founder of campaign organization Riverine People, pointed to environmental changes that are making life harder for communities.

“This year, riverine communities across the Brahmaputra and Teesta river basins are facing severe erosion,” he told The Guardian. “A very small riverine community, the water Gypsy, live in the rivers, on boats. Floods makes their life and livelihoods harder.”