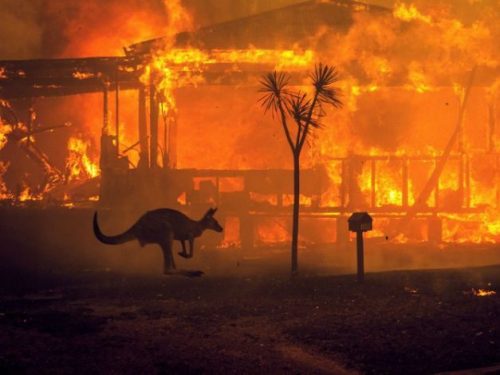 The devastating Australian bushfires in late 2019 and early 2020 killed or displaced nearly three billion koalas, kangaroos, and other wildlife, three times more than previously estimated, according to a new report by the World Wide Fund for Nature (WWF).

“The Guardian has learned that an estimated 143 million mammals, 180 million birds, 51 million frogs, and a staggering 2.5 billion reptiles were affected by the fires that burned across the continent,” the paper reports. “Not all the animals would have been killed by the flames or heat, but scientists say the prospects of survival for those that had withstood the initial impact was ‘probably not that great’ due to the starvation, dehydration, and predation by feral animals—mostly cats—that followed.”

The study, the first attempt at a continent-wide assessment of the bushfires’ impact on wildlife, was based on a burn zone of 11.46 million hectares, nearly the entire area of England, said lead researcher Lily van Eeden of the University of Sydney.

“It’s hard to think of another event anywhere in the world in living memory that has killed or displaced that many animals,” said WWF-Australia CEO Dermot O’Gorman. “This ranks as one of the worst wildlife disasters in modern history.”

“We really need to start thinking about how we can rein in this demonic genie that’s out of the bottle,” added University of Sydney ecology professor Chris Dickman, who oversaw the project, referring to climate change. “We need to be looking at how quickly can we decarbonize, how quickly can we stop our manic land-clearing.”

Dickman added that the researchers were shocked by their own central finding, The Guardian writes. “Three thousand million native vertebrates is just huge. It’s a number so big that you can’t comprehend it,” he said. “It’s almost half the human population of the planet.”

The Thomson-Reuters Foundation adds that the wildfires will drive some species to extinction before humanity has even taken note of their existence. “We don’t even know what we are losing,” Dickman said. “These were species that were here and now they have gone…It’s almost too tragic to think about.”

The full report in The Guardian traces Australian scientists’ warnings about the connection between carbon pollution and bushfire risk back to the late 1980s, and details some of the other recent research on habitat loss due to the fires.

“In evidence to a royal commission into the bushfires in May, the Australian meteorology bureau presented data showing dangerous fire weather in southeast New South Wales and Victoria was now starting in August, three months earlier than in the 1950s,” The Guardian writes.