Transit in a Pandemic: Now Is the Time to Undo Neglect, Systemic Racism 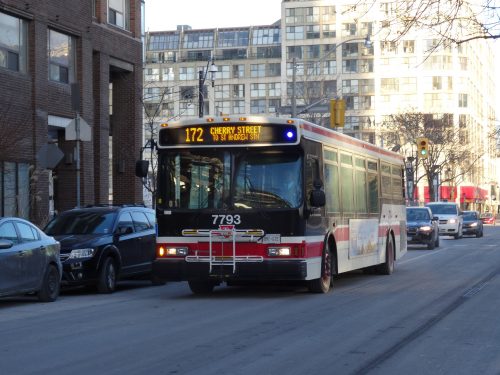 As pandemic-weary Americans flee mass transit in droves and commuter-driven emissions begin to spike back up, a Black transit policy expert is urging city leaders to recognize the critical role that public transit plays in creating a world where Black lives do matter.

In an op-ed for Bloomberg CityLab, Darnell Grisby, director of policy development and research at the American Public Transportation Association, urges his fellow policy-makers to embrace Martin Luther King’s understanding of urban public transportation as “a genuine civil rights issue.” Grisby traces his connection to that insight back to his own experience of systemic racism growing up in South Los Angeles, when he first understood the origins of a clicking sound he’d hear often on his walks.

“It turned out to be people in nearby cars locking their doors at my approach,” he explains. “The drivers saw their vehicles as a source of freedom and a space of safety; they saw me, a young Black man on a sidewalk, as a threat.”

Experiences like these spurred Grisby to pursue his education and, later, a role in public policy. “I entered public transportation as a career, to re-establish the public realm, provide the space for a new social contract to emerge, and connect communities to opportunity,” he writes.

Still guided by this humane vision, Grisby asks his fellow policy-makers to connect the dots between race and public transit, arguing that any sincere reflection on Black Lives Matter must take into account the complex matter of how people move, as that determines where they work and live.

To ensure that public transit can realize its fundamental promise as the vehicle for universal public good that Dr. King envisioned, Grisby recommends three core changes. The first is to address structures of transit governance that, in many communities, tend to “promote the needs of predominantly white suburban commuters at the expense of communities of colour with higher transit use and more supportive land use.”

Light rail in suburban districts, for example, is often prioritized over the complex, expensive, but necessary transit requirements of “denser, more diverse” districts—to the detriment of the whole. “We may spend billions on a new light rail system, but if spending on the unhoused is insufficient, the trains will be full of homeless people,” he writes.

Grisby next asks transit planners to recognize that “transit advocacy is about a lot more than transit.” A lack of affordable housing, for example, “will remove those that most need and most use the adjacent transit service,” he warns.

Finally, he calls for reform in the way transit agencies recruit their CEOs. The current focus on “prior operational experience” excludes many highly-educated Black managers who, unlike their white peers, are far more likely to ride the systems they are managing.

“Research shows that 60% of transit riders are of colour,” he writes. “However, according to self-reported data from the American Public Transportation Association’s Transit CEO Committee, only 16% of CEOs are of colour. The industry is missing out on people with personal experiences with the product and a political passion for justice.”

Meanwhile, Inside Climate News reports that transit agencies across the United States are petitioning Congress for relief as virus-fearing commuters choose cars over transit.

“The financial impact COVID-19 has wreaked on all U.S. transit agencies is estimated to be more than US$40 billion through April 2021,” Inside Climate writes, citing analysis by the national public transit advocacy group Transit Center. New York City’s Metropolitan Transportation Authority (MTA) alone is “facing such an alarming budget deficit—a $10.3 billion loss over the next two years—that one analysis estimates the authority would have to cut half of the city’s bus and subway lines to make up the difference.”

In its coverage of the MTA crisis, the New York Times—which forecasts the potential shortfall hitting $16.2 billion by 2024—writes that rescue measures for the system “include reducing service, slashing the transit work force, scrapping planned infrastructure improvements, raising tolls beyond scheduled increases, and adding to its already record-high debt.” Citing comment by Mitchell Moss, an NYU professor of urban policy and planning, the Times adds that the cuts to the system risk imperiling the economic recovery in a city where unemployment currently exceeds 20%.

Kneecapping mass transit and hobbling local economies, the pandemic is also laying waste to efforts to fight the climate crisis. In its coverage, Inside Climate cites a recently updated study by the Helsinki-based Integrated Carbon Observation System, which says that “traffic, and carbon emissions, quickly rebounded across the world in early June as lockdowns began lifting.”

That correlation does not surprise Elizabeth Irvin, senior analyst for the Union of Concerned Scientists. A study to which she recently contributed “found that buses produce about one-quarter fewer carbon emissions than private vehicles per trip-mile, and rail produces about 80% fewer emissions,” reports InsideClimate.

“In the long term, when we finally have a vaccine and we return to some form of normal, it’s a really big concern if everyone is afraid to ride transit and we see a permanent decline in transit ridership,” Irvin said.