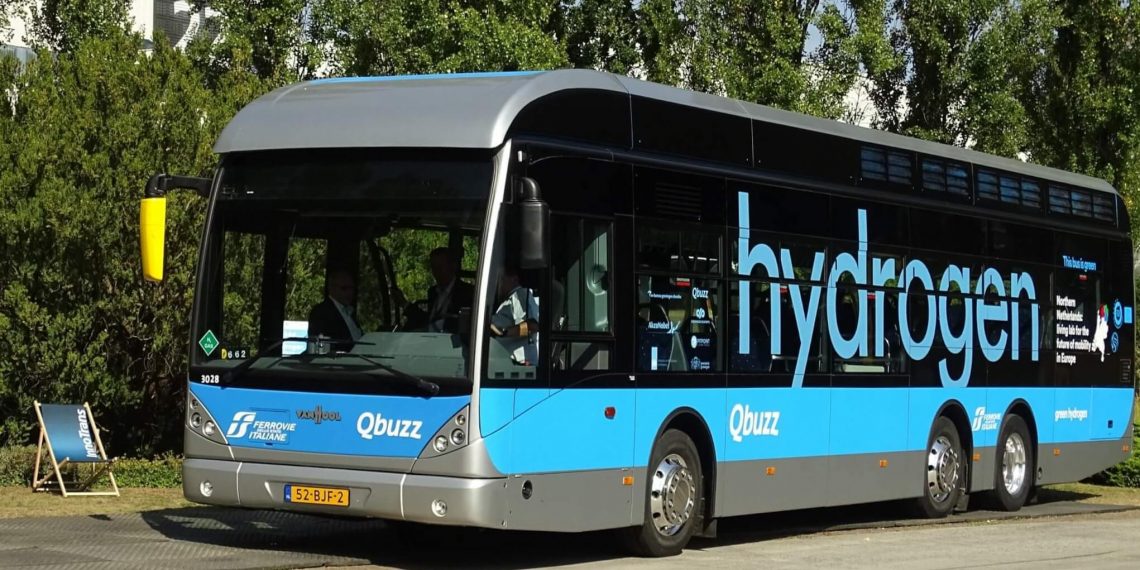 Hydrogen-fuelled vehicles are already a reality in many cities. Image: By Mirkone

EU industry is seeking ways to save surplus power. Now it’s also hunting for methods to use that stored electricity to make green fuels.

LONDON, 21 July, 2020 – With renewable energy now the cheapest way of mass-producing electricity, the race is on to find the best way to conserve the surplus for use at peak times, and also to use the stored electricity to develop new fuels for transport.

And European Union companies are competing to devise lucrative ways to use this cheap power just as more solar and wind energy is being produced than the market demands.

Large batteries are currently the favoured method, because they are already cost-effective when used with pumped storage. This uses cheap electricity to move water uphill into reservoirs, to be released later to drive turbines when extra electricity is needed to meet peak demand.

Both these technologies take advantage of buying power at rock-bottom prices, and make their profits by storing it – until they can sell it back at much higher prices when the peak arrives.

The newer technologies under development seek to use the cheap surplus electricity to create so-called green hydrogen, and now green ammonia – both for use as substitutes for fossil fuels.

The hydrogen can be used in cars, trucks, buses, trains, and ultimately, optimists believe, in aircraft. Ammonia, it’s hoped, can power ships. Both ideas aim to cut out fossil fuels entirely.

Most hydrogen for fuel and industrial purposes is currently being produced from natural gas, a fossil fuel, and is called blue (or sometimes brown) hydrogen. Environmentalists do not regard it as much of an advantage in combatting climate change, because it’s derived from methane, even though when it’s burned the hydrogen produces only water.

However, a second method of hydrogen production, which also uses cheap renewable electricity to split water into hydrogen and oxygen, avoids carbon emissions altogether, and is attracting worldwide interest.

Costs come down as the volume of production increases, so if green hydrogen can be supplied on an industrial scale it is hoped it can out-compete both blue hydrogen and fossil fuels for transport.

New Energy Update, a renewable energy newsletter published by Reuters, reports that European companies are scrambling to use cheap surplus electricity from wind power to take advantage of a growing market for green hydrogen.

Offshore wind operators are combining with airports, airlines and transport groups to develop a renewable hydrogen electrolyser in Copenhagen by 2027.

The Belgian port of Ostend has another project with different partners, but also using surplus offshore wind power to make cheap green hydrogen.

On this evidence green hydrogen is close to viable commercial exploitation, whereas the potential for ammonia is still being explored, even though it has some possible advantages as a cleaner shipping fuel.

This is principally because there is already a global transport system in place for ammonia because of its use in fertilisers – although this ammonia is produced using fossil fuels.

Unlike hydrogen, ammonia does not need to be stored at very low temperatures or in high-pressure tanks. It could be used in liquid form in ships and would provide enough energy for long voyages – in a similar way to fuel oil. It can also be used in normal engines without complex on-board processing, or in fuel cells without hydrogen’s potential high risks.

But as the Environmental Defense Fund points out in a report into the technology, the surplus renewable energy needs to be very cheap to have a chance of making it cost-competitive.

However, with the global shipping industry committed to cutting its global greenhouse emissions in half by 2050, compared with 2008 levels, the report makes it clear that ammonia seems currently the most promising technology to achieve that. – Climate News Network