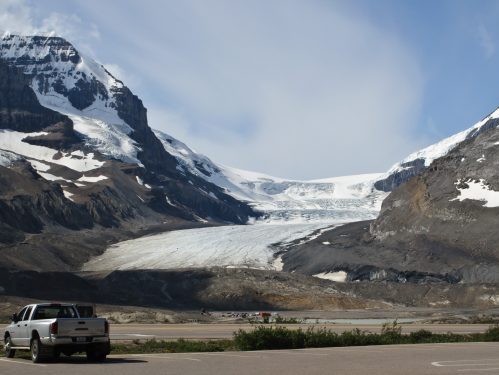 In the wake of last weekend’s fatal rollover of an Ice Explorer tour bus near the Athabasca Glacier in Alberta’s Jasper National Park—the cause of which remains under investigation—a Canadian glaciologist is pointing to the risk of venturing or dwelling near icefields that are shifting and shrinking.

The incident, which occurred on July 18 on Jasper’s Columbia Icefield, killed three people and left 24 others injured, 14 critically, reports the Toronto Star. Explaining the rigorous safety protocols that have been in place for such forays since the Ice Explorer tours began, Kenn Charlton, a former long-term employee of the Icefields Centre, told the Star that “something must have gone ‘catastrophically wrong’ for an Ice Explorer to leave the road.”

Glaciologist Jeffrey Kavanaugh, an associate professor in earth and atmospheric sciences at the University of Alberta, said he wonders whether the moraine the vehicle was traversing “shifted or otherwise caused the vehicle to lose traction.”

While Kavanaugh did not know how this specific rollover happened, said the Star, he did note that “it’s possible for small movement of rock to be dangerous if you’re in the wrong place at the wrong time.” (The Star explains that a moraine is “essentially a big pile of rock and debris scraped up by the glacier, mixed with ice.”)

While a moraine is inherently unstable, Kavanaugh explained, the potential for unexpected and rapid shifts may be increasing with rising temperatures. Observers are “seeing an uptick in large events, things like rockslides or floods, near glaciers around the world, because when they shrink, it affects the environment in which they’ve sat, sometimes for thousands of years.”

Case in point, he said, was the spectacular 2015 collapse of a mountain slope below the fast-retreating Tyndall Glacier in Alaska, which saw 180 million tonnes of rock tumble down into a fiord, producing a tsunami wave that sent water 200 metres up the sides of the slope.

“Retreating glaciers can also spark floods,” he told the Star, “when they dam a lake or river for years and then one day melt or float away, releasing the water they’d been holding back.”