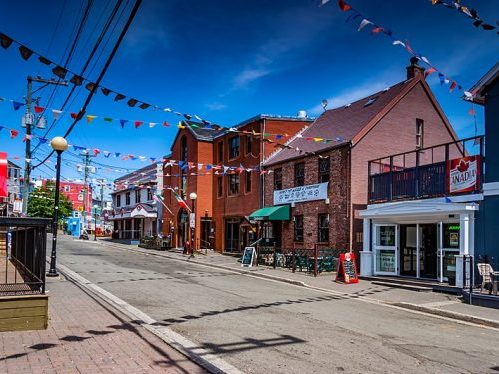 Pandemic-weary residents and business owners in St. John’s, Newfoundland are getting used to a newly-refashioned pedestrian-only downtown, and many of them hoping the changes will be permanent, though accessibility advocates warn the current street closure plan is unfriendly to people with mobility issues.

Dick Barter, co-owner of the Green Door Restaurant on Water Street and a long-time advocate of the plan, told the Canadian Press he is “very happy” that strolling people, not speeding traffic, will be going past his door until Labour Day, when the street closure experiment ends.

With restaurant owners like Barter noticing an uptick in business, reports CP, “many hope the transformation on Water Street will become an annual fixture.”

Provincial Finance Minister Tom Osborne is one such supporter. “It’s nice to see the economy start to take shape again,” he told the Star.

While widely celebrated, the pedestrian-friendly modifications to Water Street are now being tweaked to accommodate the needs of people with mobility challenges, after resident Lisa Walters posted a photo series on Facebook showing how difficult it was to navigate the new space in her wheelchair.

Responding quickly to Walters’ observation that “so many businesses could build these elaborate patios overnight, and still not have small wheelchair ramps into their stores or restaurants,” the mayor’s office “acknowledged room for accessibility improvements, and discussed a plan to develop a program to install ramps,” CP says.

In a later Facebook post Walter noted that she had spoken with St. John’s Mayor Danny Breen, and the conversation left her “hopeful that some changes will actually be made.”