With U.S. Fossils ‘Hurtling Toward Bankruptcy’, Execs Get a Payout While Abandoned Wells Leak Methane 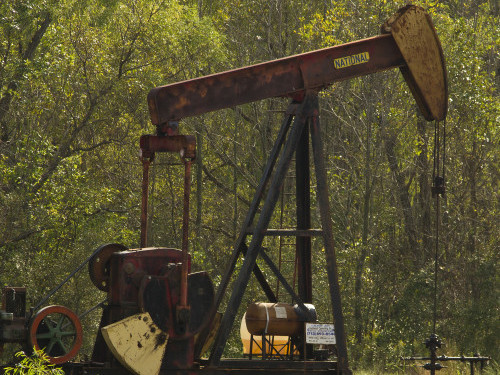 With U.S. fossils “hurtling toward bankruptcy at a pace not seen in years,” companies are already abandoning unprofitable oil and gas wells or leaving them untended, the New York Times reports, producing an immediate, new source of climate-busting methane and a longer-term environmental mess for taxpayers to clean up.

But the companies are still finding millions of dollars for lavish executive compensation packages as they barrel downhill, the Times says.

“It seems outrageous that these executives pay themselves before filing for bankruptcy,” Kathy Hipple, an analyst at the Institute for Energy Economics and Financial Analysis, told reporter Hiroko Tabuchi. “These are the same managers who ran these companies into bankruptcy to begin with.”

The Times report opens with the story of MDC Energy, a Midland, Texas-based company that filed for bankruptcy eight months ago. At the time, at least one tank at one of its wells was “furiously leaking methane” into the atmosphere. By early July, it still hadn’t been repaired.

“By one estimate, the company would need more than US$40 million to clean up its wells if they were permanently closed,” the Times explains, even though its parent company’s debts already exceed its assets by more than $180 million. “In the months before its bankruptcy filing, though, the company managed to pay its chief executive $8.5 million in consulting fees,” according to allegations in bankruptcy court from French investment bank Natixis.

The Times also points to almost $15 million in senior executive bonuses in the week before North Dakota shale driller Whiting Petroleum declared bankruptcy, $25 million to a group of execs before shale legend Chesapeake Energy folded in June, and a $9.7-million COVID-related tax refund to Diamond Offshore Drilling just before it went to bankruptcy court.

“The industry’s decline may be just beginning,” the Times says, with Rystad Energy estimating that another 250 U.S. fossils could declare bankruptcy by the end of this year. And “the environmental consequences of the industry’s collapse would be severe. Even before the current downturn, methane, a powerful greenhouse gas, was being released from production sites in America’s biggest oil field at more than twice the rate previously estimated, according to a recent study based on satellite data. Some experts say that with the industry in disarray, efforts to fix leaks of methane, which pound for pound can warm the planet more than 80 times as much as carbon dioxide over a 20-year period, may fall by the wayside.”

The Times says it’s also likely that U.S. fossils, just like their Canadian counterparts, have failed to set aside enough funds to clean up their abandoned wells after they’re through with them. “An analysis of recently bankrupt oil and gas companies’ financial statements, prepared for The New York Times, shows a funding shortfall,” Tabuchi writes.

“They’re sitting there and they’re leaking. And they’re much leakier than a well that’s still in production and being monitored, although those leak, too,” said Robert Schuwerk, Carbon Tracker’s executive director for North America. “And companies haven’t been setting aside the money, because they’d rather spend the money on drilling a new well.”