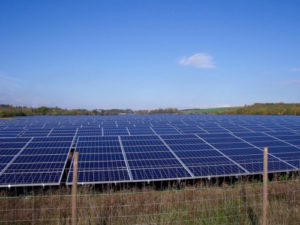 A New York-based developer is planning to lease the site of a former landfill near Columbus, Ohio to build a 50-megawatt solar farm.

The project could begin generating enough electricity for 5,000 average U.S. homes as early as 2022, the Columbus Dispatch reports.

BQ Energy LLC “will develop, build, and operate a solar energy facility once the purchase agreements of the renewable energy are committed to underwrite the project, Columbus Solar Project LLC,” the Dispatch says. “The Solid Waste Authority of Central Ohio, which owns the 186-acre site, is leasing 173 acres of the land to the company for 25 years.”

The developer “will pay approximately US$70 million to install the solar panels, and SWACO will receive an escalating rental payment per megawatt of installed electricity capacity,” the paper adds. The Solid Waste Authority expects those payments to add up to $12 million over the life of the contract.

“As we get close to the commercial operation, we would love to have a long-term supply contract,” said BQ Energy Managing Director Paul Curran. “Solar is uniquely positioned to do that because we don’t have a fuel cost. So we could sell power at a fixed price for 20 years to a potential buyer.”

From SWACO’s point of view, the deal is an opportunity to get rid of $200,000 to $400,000 in annual maintenance costs for a facility that operated between 1967 and 1985. “Methane gas, produced from decomposing materials, still has to be burned off from an underground piping system,” the Dispatch explains, since the gas isn’t high enough quality to be put to use. But while “no buildings can be constructed on the site because decomposing materials underneath continue to settle,” the paper adds, “officials said solar arrays are considered acceptable to place on the site and would benefit the community.”

“This is a great use of this property,” said SWACO Operations Director Scott Perry. “This will make the property financially self-sustaining,” and “will drive greater environmental effects here within our region by producing clean, renewable energy. So it’s a very exciting project.”