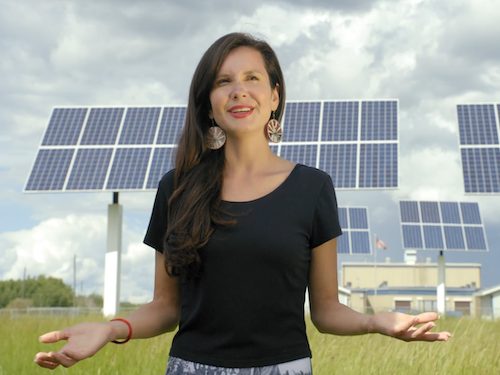 A member of the Lubicon Cree First Nation, Melina Laboucan-Massimo has a master’s degree in Indigenous governance and is the founder of Lubicon Solar and Sacred Earth Solar and co-founder of Indigenous Climate Action. She’s also the host of Power to the People, an exciting new series on APTN that explores the renewable energy revolution empowering Indigenous communities throughout Canada and around the world. The video on the Charged Up site is an excerpt from the first episode.

Charged Up recently sat down with Melina to discuss her projects, what drives her and the change she’s working toward.

You have more than 15 years of experience in organizing with Indigenous communities, focusing on environmental justice and renewable energy. What brought you to this work and what compels you to keep doing it?

My first life experience in this work happened when I was seven. It was 1988, and my community was blockading the road that was built in our territory for logging and oil and gas exploitation. It was bringing oil and gas and industry into our territory, and it was beginning to have an impact on the land, which up until that point was pretty pristine. People lived off the land, and there were sustainable ways of living. For instance, my nimosom—my grandfather—was a hunter and trapper.

We’ve never signed treaty—and our territory is in the Treaty 8 region—so it was a very contentious issue and became internationally known. All of us, all the families, were at that blockade on the road. I have interesting pictures of my kokum—my grandmother—and my mom there. I was in the car on the side of the road.

As I grew older, going back and forth from Little Buffalo then to the town of Slave Lake into Edmonton for school was an eye-opening experience. That’s what really politicized me: seeing how the resources were leaving communities like mine—communities impacted by resource extraction but not receiving the benefits I saw in the city, like schools, libraries, books, and running water. I was shocked that this was only a five-hour drive away. So that’s why I started this work. It’s like an inheritance of past generations.

Are there key events, people or experiences in your life that led you to do the work you do?

When I was a child, I would go out on the land in our territory with my grandparents, and that was really formative for me. It was in the summers, and we would go out into our territory on the horse and wagon, living off the land. Seeing how pristine and beautiful and vast our territory was had a really strong impact on how I knew the boreal forest to be. It was such a healthy ecosystem.

As I grew older and went to school in Edmonton and to university for my first degree, I would come back home every summer and winter, and it was just shocking to see the changes in the landscape. It was really upsetting for me, especially as I became more and more aware of resource extraction and the impact it was having. I would literally drive home crying. I felt helpless in the face of these huge logging trucks driving by all the time.

For your fellowship, you studied renewable energy models that can be replicated in communities. Can you tell us about your findings?

When I installed my first solar project, I wanted to do it in my own community so I could learn what it’s like for an Indigenous community to put up a solar project within the energy matrix of Alberta. That was my first foray into renewable energy implementation. I started fundraising in 2013-14 and put the installation up in 2015. We were able to hire and train local community members and youth to implement the solar project. I literally cried tears of joy when we broke ground to started building and when we did the ribbon-cutting ceremony at our solar feast.

I learned that there can be challenges for communities doing project implementation around renewables. If you are doing an on-grid system, each system is done through a different provincial jurisdiction, depending on the province’s energy grid. Some are government-owned, like BC Hydro. Alberta is privatized, so different energy utility companies dominate different areas. Communities need to know which energy system they exist within if they want to connect to the grid.

There are challenges for remote communities as well because it can be more expensive to bring in solar or other equipment. But in my opinion, the costs are outweighed by the benefits: getting off of diesel, propane, or any type of fossil fuel will help us reduce our greenhouse gas emissions. It’s also a form of self-determination—the community gets to determine how they want to produce and consume energy.

You’re hosting Power to the People, a new TV series on ATPN. What inspired you while filming?

All the communities we profiled on Power to the People were inspiring. We went to over 26 locations across the country and profiled a variety of renewable energy technologies, including small-scale and large-scale solar, large-scale wind, biomass, district energy, geo-exchange, run of river, eco-housing, and food security projects. We showed the whole gamut of technologies and why they’re important, and we focused on climate adaptation and research, especially in the hot spots of the country where they’re worried about running out of water.

It’s so amazing what’s happening. In Canada, we already have over 2,300 small-scale projects and 180 large-scale Indigenous-led projects. Large-scale is a pretty big feat when you’re putting up 47 wind turbines that produce three megawatts per each turbine!

We’re really excited to launch the program. We’re doing 13 episodes, and each will be available in English and in the Cree language as well. It was no small undertaking to translate an entire TV series into an Indigenous language.

And you did some of the translation yourself?

I helped with it. I’m not a native language speaker like the older generation of my family. It is my dad’s first language and my aunts’ and uncles’. So I went back home and worked with my aunt Lillian, who’s a language teacher and taught in the school for 35 years. She helped me translate the voiceovers and go over pronunciation, and my dad helped translate one of the episodes as well. It was a family process. I also had a Cree language coach from Alberta who worked with me in the recording studio.

It was a lot of work, but it was great. It felt like a real privilege to have time to work on and understand how you translate issues of climate change and energy transition into Cree. Especially when you don’t have words like “biomass” and “wind turbines.” Or even “climate change.”

These days, what or who gives you hope?

Some days I feel sad and disappointed at the lack of action that people are taking on climate change, especially world governments and corporations that stand in the way of advancement. But after doing the TV show, I felt really encouraged and inspired by the number of communities that are not waiting for outside action and are being their own champions of renewable energy, deciding what a just transition looks like in their communities. We often don’t know about these communities; they’re just doing the work. To me, that was the amazing thing: to be able to film with Power to the People and lift the stories that can be models for the rest of us.

What does a just transition mean or look like to you?

Originally the term was utilized in America around transitioning workers. And that makes a lot of sense because we need to transition workers. For me, it’s a broader term.

Indigenous communities have been on the front line of resource extraction and climate change, but they’ve always been the last to receive the benefits of resource extraction. As I said, fossil fuel extraction was happening in and around my community, yet we didn’t have running water or paved roads or a community centre or any kind of infrastructure or support.

We shouldn’t be the last again to receive the benefit of an energy transition to renewable energy. We’re already suffering from environmental racism and degradation, and we’re dealing with climate change adaptation and mitigation as well as a colonial history that detrimentally impacted our communities. The very social fabric of our communities was ripped apart intentionally by government and colonial policies, and our communities are still in crisis. This is why a just transition is so important in our communities, and you can already see Indigenous Peoples leading the way.

Find out more about Power to the People or stream the entire series on APTN lumi.