PTSD is the Invisible, Life-Threatening Injury for Wildland Firefighters 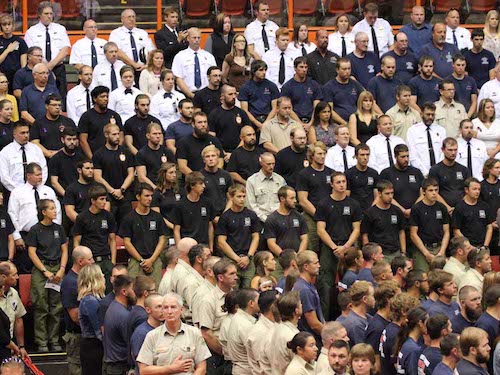 Republished with permission from Wildfire Today, with light editorial changes.

During his 14 years working for the U.S. Bureau of Land Management as a wildland firefighter, a fire that Danny Brown responded to on July 30, 2015 changed his life in ways that most of us cannot fathom. Brown was one of the first to find the burned body of his friend David Ruhl, who was trapped and killed during the initial attack of the Frog Fire in northern California.

An excellent article by Mark Betancourt in High Country News describes the upheaval that occurred in Brown’s life, how he tried to deal with it, and how the government’s system for treating on-the-job injuries failed.

Here is a brief excerpt:

The trauma Brown sustained that day could happen to any wildland firefighter. It drove him out of the career he loved and the community that came with it, and to his agony it limited his ability to support his wife and their three children. He was eventually diagnosed with chronic PTSD—post-traumatic stress disorder—and in his most desperate moments, he thought about taking his life. Adding to his suffering was the feeling that he had been abandoned by the government that put him in harm’s way.

A number of people bent over backwards trying to help Brown receive the professional help he badly needed, including a friend, a supervisor, the Wildland Firefighter Foundation, and Nelda St. Clair, a consultant who coordinates fire-specific crisis intervention and mental fitness for federal and state agencies.

Federal agencies that employ wildland firefighters (but call them technicians) hire them to perform a hazardous job. A percentage of them in the course of their career will be involved directly or indirectly with a very traumatic event. Many of them will power through it with no serious effects, at least outwardly. But others will suffer unseen injuries after having performed their duties.

These federal agencies do not have an effective system or procedure for helping their employees heal from chronic PTSD incurred while on the job. Untreated, chronic PTSD can lead to suicide.

St. Clair tries to keep track of how many wildland firefighters take their own lives each year. Her unofficial tally suggests as many die by suicide as in the line of duty.

I can’t help but think that if the job title of these “technicians” were instead, “firefighter”, it might be easier for the hierarchy to understand, and get them the professional support some of them so desperately need. Range Technicians have different job stresses than wildland firefighters. In some cases, chronic PTSD is an issue of life and death, not something we can keep ignoring.

If you are a firefighter or part of his or her family, you need to read the article in High Country News. If family members recognize the symptoms, it could be helpful.

If you are in an influential position in the federal land management agencies, you need to read the article. Look at the firefighters in the photo above who were attending the memorial service for Ruhl. Do what you can to ensure that no other employees are forced to suffer like Brown, and no doubt others, have.

If you are a federal Senator or Representative, you need to read the article. Then introduce and pass legislation so that other “technicians” do not have to suffer like Brown.