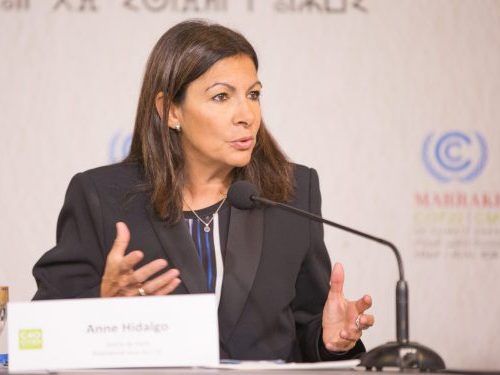 Paris Mayor and leading climate advocate Anne Hidalgo was re-elected by a large margin and ecology candidates engineered what The Guardian called a “green wave” in local elections across France on Sunday.

“You have chosen hope, teamwork, a Paris that can breathe, that is better to live in, shows more solidarity, and that leaves nobody to fall by the wayside,” said Hidalgo, a past chair of C40 Cities who had put the response to the climate crisis and local air pollution at the centre of her campaign platform.

The Guardian says Hidalgo campaigns as a Socialist candidate, and receives support from the Europe Écologie Les Verts (EELV, or Green) party.

The first of two rounds of voting in local elections took place March 15, two days before France’s coronavirus lockdown went into effect. “More than 60% of local mayors had been already decided in the first round, but many major cities and towns, including Paris, Marseille, Toulouse ,and Lyon remained up for grabs.”

The turnout for the second round of voting last weekend was just 40%, a sharp decline from the 52.4% threshold in the last round of local elections in 2014. But after those votes were counted, The Guardian says ecologists took the reins in Lyon, France’s third-largest city, as well as Bordeaux, a “bastion of the centre right”, and Strasbourg, Besançon, Poitiers, Annecy, and Tours. In Lille, the Green mayoralty candidate lost to Socialist incumbent Martine Aubry by just 227 votes.

Pundits interpreted the result as a failure for President Emmanuel Macron’s La République en Marche (LREM) party, which has largely failed to gain traction at the local level in the four years it has existed. “While Macron’s centrist party is dominating French politics at a national level, having fragmented the traditional right and left, it has little representation locally,” The Guardian says.