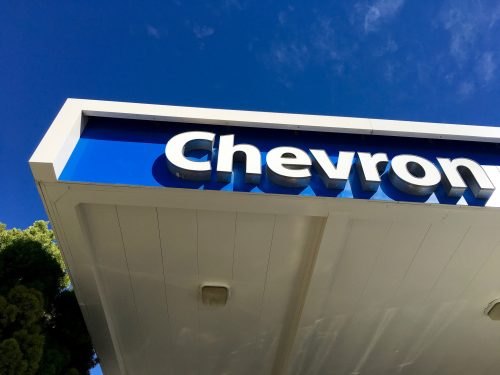 Colossal fossil Chevron’s recent “Black Lives Matter” tweet has sparked a fierce debate among Black Americans about what it means to have Big Oil speaking out against racism, even as its emissions and shareholder-beholden profit model lay waste to Black communities at home and around the world.

Chevron’s decision to speak up in the wake of the police killing of George Floyd “evoked a visceral reaction from many climate activists,” reports InsideClimate News.

“As the human energy company, we are just that—humans, and we’ve felt the impact of what is happening in the United States around racial injustice,” tweeted the fossil fuel giant. “Our company is rooted in a diverse and inclusive culture, but we also understand it is our time to listen and learn.”

California-based environmental justice organization Communities for a Better Environment offered an acid rebuke: “Your performative solidarity with the Black community is an absolute joke,” they posted. “You should be ashamed of yourself for killing, poisoning, and ruining the health and lives of Black people all over the world.”

Nowhere in evidence in Chevron’s recent protestations of its present and future commitment to taking action “in the ugly face of racism, discrimination, and injustice” is a sense of shame or recognition of its role in those harms. Those notes are also distinctly absent from the official verbiage about diversity and inclusion that adorns its website, writes InsideClimate.

Such hypocrisy disgusts Doria Robinson, a third-generation African American and resident of Richmond, California, who has long fought to hold the company to account for the pollution produced by its presence in her city.

“The Richmond refinery has a long history of polluting the air breathed by [the area’s] predominantly low-income residents of colour, while providing them with limited employment opportunities,” writes InsideClimate. Robinson said the company has “leveraged its financial power to steer local politics in its favour”, while offering very little in community investment in return. Chevron, she added, would do best to keep silent on the subject of racial and environmental injustice.

InsideClimate also cites a 2009 report by Communities for a Better Environment revealing that Richmond’s children “suffer more than twice the national average of asthma.” A toxic fire occurred at the refinery in 2012, and the area’s residents have a greater risk of mortality from respiratory infections like COVID-19. With all of this around them, Richmond residents “know they are ‘living in a very hazardous place’,” said Robinson.

For climate and justice advocates like Robinson, “Chevron’s core business model—predicated on the burning of fossil fuels, which inevitably hits marginalized communities hardest—is incompatible with meaningful measures of racial or environmental justice.” Adding more Black workers to the payroll will not change that fact.

“Industry calls to increase equality and racial diversity do not take into account ‘the livability and survivability of Black people and their communities,’ which is at the centre of the current protests,” writes InsideClimate, citing energy analyst, author, and investigative journalist Antonia Juhasz. Sincere and meaningful action by Chevron would include “a more appropriate response to activists’ calls for racial justice,” and seeing the company “take steps to ameliorate its operations’ disproportionate impact on communities of colour, beginning with complying with all applicable laws and improving safety.”

Not every Richmond resident is skeptical of Chevron’s intentions, however.

Marking an apparent divide between those who view Chevron’s public statements as rank hypocrisy and those who discern it as sincere, InsideClimate notes that the emphasis some place on workforce diversity “stands in contrast to younger racial justice and climate justice activists’ interest in holding the industry accountable for climate change and the environmental racism they believe is ingrained in its operations.”

Case in point is Henry Clark, an African-American activist born near the Chevron refinery who is currently executive director of the West County Toxics Coalition, a multi-racial environmental justice non-profit created after the 2012 fire to pressure the company to abide by regulatory recommendations. Clark does not believe Chevron is merely playing “lip service,” and cites the Chevron Modernization Project—“which he helped shape,” notes InsideClimate—as proof the company has sought to reduce the impact of its refinery emissions on local residents.

“Chevron should focus on opening more jobs and providing job training for Black residents located nearby their operations,” Clark added.

But to others, like Richmond youth organizer Zolboo Namkhaidorj, “no amount of philanthropy can ‘ever outweigh the years and years of harm and poisoning [Chevron has] done to the community’,” writes InsideClimate.

Asserting that the company hires locally only in order to “justify polluting and policing the community,” Namkhaidorj says green job creation must be the priority. Her organization, Communities for a Better Environment, has launched its own fight to have Chevron’s Richmond refinery decommissioned.