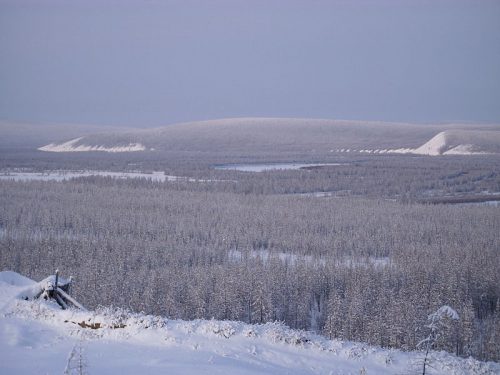 The northeastern Siberian town of Verkhoyansk is believed to have set an all-time high temperature record above the Arctic Circle Saturday when thermometers soared to 38°C/100.4°F. The town is located 4,800 kilometres north of Moscow, has been keeping temperature records since 1885, and normally sees an average June temperature of 20°C/68°F.

“If verified, this would be the northernmost 100-degree reading ever observed, and the highest temperature on record in the Arctic, a region that is warming at more than twice the rate of the rest of the globe,” the Washington Post reports. A reading of 35.2°C/95.3°F on Sunday showed the Saturday figure “was not an anomaly,” the paper adds.

“In 2020, Siberia has stood out for its above-extreme temperatures, which have accelerated the melting of snow and ice; contributed to permafrost melt, which led to a major oil spill; and have gotten the Siberian wildfire season off to an unusually early and severe start,” the Post notes. “The oil spill in Norilsk—above the Arctic Circle in north-central Russia—leaked at least 20,000 tons of diesel fuel into the nearby Ambarnaya River and is thought to be the worst spill in the Russian Arctic’s history.”