No Result
View All Result
FEATURED
BREAKING: 40% of Fossil Fuels Now Under Development Must Stay in the Ground May 17, 2022
Rocky Mountain Glaciers ‘Past Tipping Point’, with Some Expected to Vanish by 2030 May 17, 2022
UK Activists Block Russian Oil Tanker From Docking in Essex May 17, 2022
EXCLUSIVE: Bid to Revive Doomed Nova Scotia LNG Project Collides with Germany’s Net-Zero Plans May 16, 2022
3,800 Residents Ordered to Evacuate after Flooding in Hay River, NWT May 16, 2022
Next
Prev
Home Climate & Society Carbon Levels & Measurement 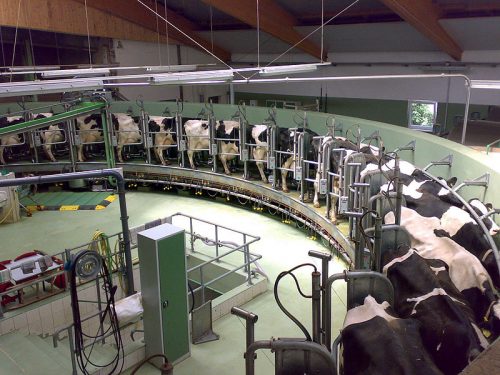 Emissions from the world’s top 13 dairy companies now equal that of the entire United Kingdom, while overproduction is driving small farmers into bankruptcy. That has experts calling for production caps, for the good of humans and of the climate.

“The impact of the 13 firms on the climate crisis is growing, with an 11% increase in emissions in the two years after the 2015 Paris climate change agreement,” writes The Guardian, citing recent analysis by the U.S.-based Institute for Agriculture and Trade Policy (IATP). The increased emissions are largely due to consolidation, which “has helped force milk prices below the cost of production for the last decade, causing a crisis in rural livelihoods and requiring taxpayer subsidies to keep farmers afloat.” To combat the trend and protect small farmers, IATP is calling for caps on production.

Stressing the timeliness of the recent findings, European director at IATP and report author Shefali Sharma said that, so far, the dairy industry has avoided the “growing public scrutiny” that has been tightening the reins on fossil industries. “Little public pressure exists to hold global meat and dairy corporations accountable for their emissions,” she said. “Few of these companies are even reporting their emissions.”

According to IATP, emissions from the 13 largest dairy companies rose from “306 million tonnes of CO2-equivalent in 2015 to 338 million tonnes in 2017.” All but 10% of those emissions come directly from the cows, “mostly in the form of methane,” The Guardian adds.

IATP’s findings echo those of a 2019 joint report by the UN Food and Agriculture Organization (FAO) and Global Dairy Platform, which described “a clear case for immediate and more ambitious action” in the industry, The Guardian adds. “The sector’s emissions have increased by 18% between 2005 and 2015 because overall milk production has grown substantially, by 30%,” according to the report. Unlike IATP, the FOA fell short of recommending cuts in production.

A production cap, however, could not only address environmental damages, but help address the economic devastation caused by the consolidation of the dairy industry. That trend “saw four out of five dairy farms close in the EU from 1981 to 2013, and 93% of family farms in dairy closing in the U.S. since the 1970s.”

“You have to get bigger or get out,” said Sharma. “The key argument is this industry drives overproduction and low prices, which creates demand, and it has marketing power, which creates demand. Demand doesn’t just happen by accident.” Supply management could “address dairy’s twin crises” by stopping overproduction, balancing supply with demand, and stabilizing prices, notes The Guardian.

The International Dairy Federation and the Global Dairy Platform issued a joint statement that disputed the IATP’s assessment. “The dairy sector is committed to producing nutritious foods in environmentally sound and responsible ways,” they said.