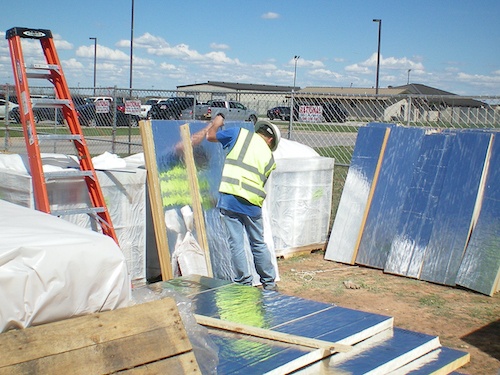 Alberta is moving to phase out its energy efficiency agency and allow future tar sands/oil sands projects to proceed without cabinet approval under a 14-point omnibus bill introduced last Thursday, prompting the energy efficiency community to scorch the Jason Kenney government for shutting down a job-creating program in the midst of a deep recession.

Bill 22 “dissolves Energy Efficiency Alberta, which was set up in 2017 under the previous NDP government,” CBC reports. “Dissolution of the agency returns Alberta to its previous status as the only Canadian province without that kind of agency.” Actually, the only province or state in North America, according to Efficiency Canada—even though Albertans got back $3 for every $1 the province invested in EEA.

The Red Tape Reduction Implementation Act also “ eliminates the need for cabinet to sign off on oilsands projects approved by the Alberta Energy Regulator (AER),” CBC adds. “Officials say eliminating that extra step could speed up the process by as much as 10 months,” although “it isn’t clear what would happen if a First Nations opposed an AER approval, as in the case of Prosper Petroleum’s Rigel project.”

That was the case where the Alberta Court of Appeal “quashed the approval after the Fort McKay First Nation successfully argued that its plan to mitigate environmental effects in the Moose Lake area wasn’t taken into account by the regulator,” CBC explains. “A spokesperson for Energy Minister Sonya Savage said project proponents have to receive approval by the government’s Aboriginal Consultation Office before getting the nod from the AER.”

“Time is money, so being able to decrease the time that it takes to get those approvals I think is always a good thing for getting Albertans back to work,” said Grant Hunter, the province’s associate minister of red tape reduction.

But job creation didn’t seem to enter into the decision on Energy Efficiency Alberta.

Environment Minister Jason Nixon said the agency will wind down by September and a separate provincial entity, Emissions Reduction Alberta, will take over its programs and about two-thirds of its staff. “Nixon says Alberta, unlike other provinces, creates 65% of its emissions from large emitters so it makes sense to focus on industry,” CBC writes.

Efficiency Canada Executive Director Corey Diamond noted that energy efficiency measures can reduce Canada’s greenhouse gas emissions by up to 40%. “It’s also a massive job creator,” he told CBC. “More jobs are created in the energy efficiency sector right now than any other part of the energy sector in North America.”

In its release, Efficiency Canada noted that the provincial agency “added $850 million to Alberta’s provincial GDP while creating more than 4,300 private-sector jobs between 2017 and 2019. Former oil and gas workers—laid off in one downturn or another—collected those paycheques.”

And the organization’s analysis still shows lots of opportunity for the province to boost its performance. “With the establishment of EEA, Alberta moved up the rankings to sixth place in Canada in 2019,” the release states. “However, despite momentum, the province still ranked 44th in North America in energy savings, falling behind states like Montana, Oklahoma, and South Carolina.”

With its support for building insulation, better appliances, efficient lighting, and other infrastructure improvements, Energy Efficiency Alberta delivered electricity savings at a cost of just 2.4¢ per kilowatt-hour, Efficiency Canada adds. And with post-pandemic recovery programs under development, “EEA was a strong candidate for federal investment to kick-start the economy,” although cities like Edmonton have already begun moving into the vacuum created by Alberta’s withdrawal from energy efficiency incentives.

“Our stakeholders have consistently reported that uncertainty is terrible for business, and the amount of back-and-forth from the provincial government on this has been bad for economic growth and bad for jobs,” Diamond said. “Cutting this job creation agency is a missed opportunity for the province to work towards economic diversification, cleaner growth, and providing stable career opportunities for Albertans.”