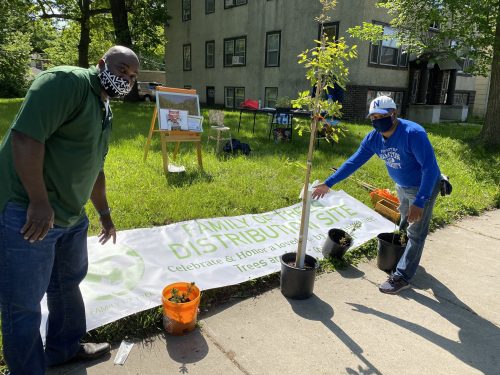 What was greeted seven years ago as a groundbreaking local climate action plan in Minneapolis is now being flagged as a source of racial division in the city where the death of George Floyd, a black man killed by a white police officer, sparked massive protests and renewed attention to police brutality across the United States.

“Hailed by environmentalists, the plan—one of the first passed by a major U.S. city—included reforms on issues ranging from energy efficiency to waste management,” writes E&E News, in a post republished by Energy News Network. “But activists say the effort launched without a critical component: the input of Minneapolis’ minority and low-income communities,” including African-American and American Indian voices.

And ultimately, “despite efforts to correct the problem, critics say the initial lack of inclusion laid the groundwork for a climate policy that doesn’t adequately address the needs of these same communities—many of which will be disproportionately affected by the consequences of a warming planet.”

E&E casts the program as “a reminder of a long-standing racial divide within the urban environmental movement and the work that still needs to be done to bring about the societal change necessary to address climate change.”

“The big picture is, how do we make marginalized communities part of the solution to global warming?” said long-time local activist Michael Chaney, co-founder of Family of Trees, a non-profit that restores tree canopies and has planted an ironwood tree in Floyd’s honour. The group works with heat-stressed neighbourhoods in north Minneapolis, a part of town with mostly African American-owned homes, businesses, and rental properties.

After leaving minority and low-income communities out of the program development process, E&E says Minneapolis hastily formed an environmental justice working group that gave the 2013 climate plan poor marks. While concluding that an effort to address buildings, transportation, and waste was “critically needed” for black and lower-income residents, working group members found “a large number of critical environmental justice concerns missing” from the draft.

Seven years later, those concerns haven’t been addressed. So they echoed when Minneapolis joined the crowd of cities declaring a climate emergency, even after Mayor Jacob Frey took office in 2017, promised to expand the city’s climate initiatives with more funding to minority and low-income communities, and declared that “climate change and racial justice are intrinsically linked”.

“Activists, particularly in the black community, say the city’s efforts must go beyond the 2013 climate plan,” E&E says.

“My entire life is wrapped around environmental justice, but I think a lot of these ideas come from predominantly white organizations,” said north Minneapolis community organizer and climate campaigner Kristel Porter. Which means they aren’t built to work in communities “already burdened by a legacy of racist practices: mortgage redlining and race-based neighbourhood covenants; underinvestment in parks, green space, and environmental services; chronically low educational achievement; and nagging poverty that keeps people from even purchasing homes, much less retrofitting them for energy efficiency or taking other measures to relieve climate stressors,” E&E adds.

“My daughter and granddaughter live in an apartment completely surrounded by concrete. There’s no trees and no green space to absorb all that heat,” Porter said. “We’re also talking about impervious surfaces and no building setbacks” for respite from heat, noise, and pollution.

Porter also expressed the burnout and utter exhaustion brought to light by so many other African-American voices responding to this moment. “It’s mostly just me going to these meetings, and I need 10 more of me to do the job right,” she told E&E. “We just don’t have the capital, the income, or the education to do that.”

Vivek Shandas, a professor of urban studies and planning at Portland State University, called the Minneapolis climate program “an exemplar of the fundamental structural challenges we’re trying to recognize and unpack” in cities across the U.S., citing three politically progressive municipalities—Minneapolis, Denver, and Portland, Oregon—as having the highest heat differentials between districts that had historically been redlined and those that hadn’t. In some cases, the difference was as high as 12.5°F/7.0°C.

And Porter is living those findings, E&E says. “Whenever the temperature goes up, the meteorologists will say, ‘Our high today was 95 degrees,’ when it’s actually 107 in north Minneapolis,” she said.

In Conversation: On Climate Mobilization, Canadian Public is ‘Ahead of Our Politics’, Klein Says