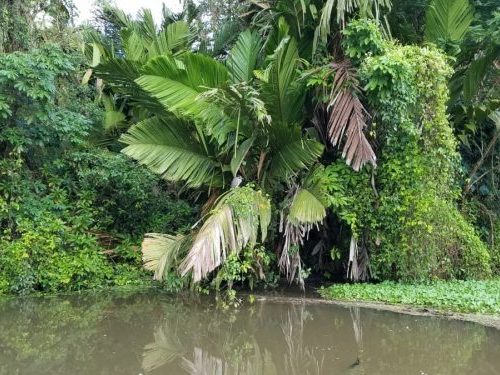 Humans must eat less meat and processed foods, create less food waste, and limit population growth if we are to stop the degradation of tropical rainforests—degradation that science is connecting ever more closely to the rise of infectious diseases like COVID-19.

As humanity’s craving for red meat and packaged food drives further encroachment of cattle farms and palm oil plantations into the world’s tropical rainforests, we are coming into contact with wild species that should have been left undisturbed within the deep jungle, write the editors of Scientific American. It is through these interactions that the scariest and most infectious modern viruses have come into the human population: SARS, Ebola, and now COVID-19.

Zika, nipah, malaria, cholera, and HIV also trace their origins to the deep, dense forest. “Three-quarters of the emerging pathogens that infect humans leaped from animals, many of them creatures in the forest habitats that we are slashing and burning to create land for crops, including biofuel plants, and for mining and housing,” Scientific American says. “The more we clear, the more we come into contact with wildlife that carries microbes well suited to kill us—and the more we concentrate those animals in smaller areas where they can swap infectious microbes, raising the chances of novel strains.”

But it doesn’t have to continue this way—there are many individual actions that can help slow deforestation. “Eating less meat, which physicians say will improve our health anyway, will lessen demand for crops and pastures,” the article states. “Eating fewer processed foods will reduce the demand for palm oil.” As well, as much as 40% of all the food humanity produces is currently thrown away; reducing that waste could also ease some of the pressure to clear forests and make way for agriculture.

Other actions, however, will require wider social changes likely to be challenged by status quo interests. “The need for land also will ease if nations slow population growth—something that can happen in developing nations only if women are given better education, equal social status with men, and easy access to affordable contraceptives,” Scientific American writes. More immediate imperatives include the prohibition of wet markets, eradication of the illegal wildlife trade—“which can spread infectious agents far and wide”—and rigorous examination of factory farming. Those farms were “the source of the 2009 swine flu outbreak that killed more than 10,000 people in the U.S. and multitudes worldwide,” the magazine notes.

In an ironic twist, some measures to place barriers between the human and animal worlds will require scientists to cross those lines—carefully. To better understand the zoonotic diseases that are spreading in human populations, epidemiologists must “tiptoe into wild habitats and test mammals known to carry coronaviruses—bats, rodents, badgers, civets, pangolins, and monkeys—to map how the germs are moving,” Scientific American says. Such surveillance, and the necessary follow-up testing, will need to be “widespread and well-funded”.