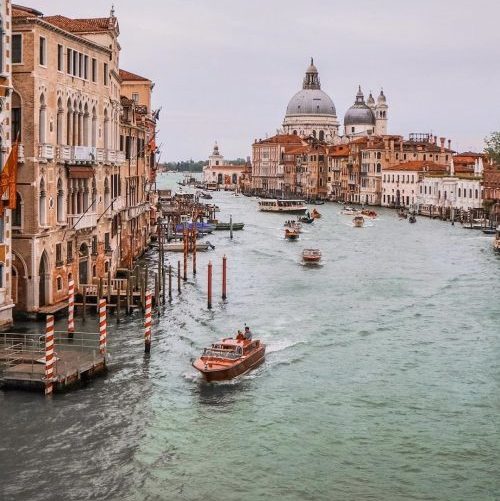 As Venice slowly emerges from lockdown—and braces for the return of millions of tourists—locals are daring to imagine another future for their beloved City of Water, after getting a tantalizing glimpse of what life could be like without colossal cruise ships and inflated rents.

“This can be a working city, not just a place for people to visit,” said law professor Andrea Zozi, an organizer of an anti-development protest recently covered by the New York Times. She and hundreds of her fellow Venetians came together to protest “a new dock that would bring boatloads of tourists through one of Venice’s last livable neighbourhoods.”

And Zozi is not nearly alone: As countries mark World Oceans Day today, port cities around the world are holding their first-ever virtual Rally to Clean Up Cruising, Stand.Earth reports on behalf of the Clean Up Carnival coalition. “During the virtual rally, activists will deliver a petition signed by 47,000 people to Carnival Corporation, Norwegian Cruise Lines, Royal Caribbean, and MSC with a list of demands for the cruise industry,” Stand writes. “Cruise executives from the companies were invited to attend the virtual rally and accept the petition, but no companies accepted the invitation.”

The rally takes place at 11 AM Alaska/3 PM New York/8 PM London/9 PM Venice, and 5 AM in Sydney, Australia. Sign up here.

“COVID-19 thrust the cruise industry into the global spotlight, exposing the horrors below the shiny surface of this sector’s business practices,” said Stand Shipping Campaigns Director Kendra Ulrich. “The failure of cruise companies to respond to the COVID-19 pandemic echoes a decades-long history of putting profits over people and our planet. It’s time for the cruise industry to start listening to the concerns of port communities, who are most impacted by their unscrupulous business practices. A return to pollution-as-usual is not an option.”

The Stand release includes statements from organizers in Venice; Hoonah and Juneau, Alaska; Nassau; Bergen; Southampton, UK; and Gold Coast, Australia. “Cruise ships pose a massive existential threat to Venice’s future,” said environmental scientist Jane da Mosto, executive director of We Are Here Venice. “Aside from the pollution and energy intensity associated with these ships, which exacerbate climate change, last June we witnessed the horrifying drama of the MSC Opera crashing into the city. As the industry grows and the number and size of ships increases, so does the environmental, economic, and social damage they cause.”

In Venice, as it has everywhere else, “the coronavirus has laid bare the underlying weaknesses of the societies it has ravaged, whether economic or racial inequality, an over-dependence on global production chains, or rickety health care systems,” writes the Times. Particular to Italy, however, has been the added revelation that “a country blessed with a stunning artistic patrimony has developed an addiction to tourism that has priced many residents out of historic centres and crowded out creativity, entrepreneurialism, and authentic Italian life.”

Tourism brings about €3 billion to Venice each year—along with “hordes of day trippers, giant cruise ships, growing colonies of Airbnb apartments, souvenir shops, tourist trap restaurants,” and rents that are far beyond the reach of many ordinary Venetians. And while the cash cow is “likely to return,” the Times notes, many locals like Marco Baravalle, leader of an anti-cruise ship movement who called the absence of the big boats “magnificent”, are looking for a shift that would balance the industry’s hold on their city.

“There is talk of a proposed international climate change centre, of lower rents drawing local artisans and factory workers back to the islands from the mainland, and of a creative community of artists, designers, web producers, and architects,” the Times writes. Tourist would still come, but may be of a type that’s more invested in the culture of the city—“they would carry canvas tote bags and be interested in Venice’s heritage, its museums and galleries. Students would stay and become young professionals, draw start-up investors, and replenish an aging and diminishing population. Good restaurants and natural wine bars would push out the awful ones.”

Such a renaissance could face strong resistance from the city’s mayor, who has a reputation for bowing to powerful boating and tourism concerns, notes the Times. But the movement for a new Venice also has many celebrity allies: Mick Jagger, Francis Ford Coppola, and Wes Andersen have all signed an open letter urging the Italian government to enact “ten commandments” for the city, including “stricter regulation of ‘tourist flow’ and the Airbnb market, and support for long-term rentals.”

By doing so, many Italians hope, they might return Venice to itself, and to Venetians.

“Supporters of the status quo are quick to dismiss such proposals as noise from the out-of-touch rich and famous,” and for those who work in the tourism industry, the cash cow cannot return soon enough.

“But it’s not only Venice’s upper- and professional-class residents who hunger for a more livable city,” observes the Times. One young couple told the newspaper that as much as they would love to raise a family in La Serenissima, “there’s no way” they could afford the prohibitive rents, even in working class districts.