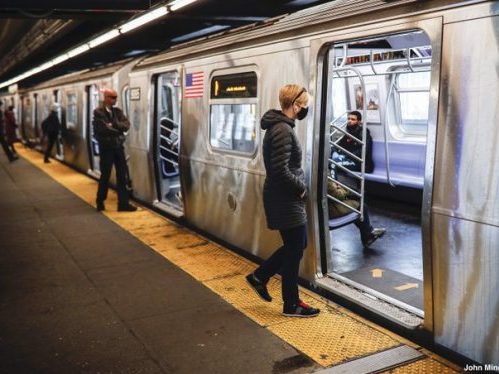 As New Yorkers give a wary eye to public transportation, the Metropolitan Transportation Authority (MTA) is scrambling to inform citizens that the very last thing they should do is hop in their cars.

Before the coronavirus overwhelmed the city, over half of its citizens—some eight million people—used public transit to get to work. As the city prepares to reopen, “officials are seeking to avoid a new disaster—the gridlock that could result if many people continue to avoid public transportation and turn to cars instead,” reports the New York Times.

The dilemma facing policy-makers is apparent: “Encouraging people to return to mass transit could increase the risk of new infections. But the region’s roads, tunnels, and bridges cannot handle a surge in car traffic, and there are few alternatives.”

For its part, the MTA, which oversees much of New York’s famous web of subways, trains, and buses, has announced a soon-to-be-released plan “to lure riders back, including ramping up service to reduce congestion, deploying the police to enforce mask usage, and stationing workers across the subway to report overcrowding.” It’s also asking city council to help with crowding concerns by mandating that major employers “create flexible start times and extend work-from-home plans.”

But convincing the public to return to transit could be a hard sell, judging by a May survey in which “nearly half of New Yorkers said they would avoid public transportation when the city comes back to life,” writes the Times.

Not helping matters is the recent decision by the Centers for Disease Control (CDC) to release public guidelines urging people to drive to work alone in their cars—with no mention of cycling or walking. The MTA moved swiftly, calling the suggestion “misguided” and pointing out that such advice is hardly helpful for the many New Yorkers who do not own a vehicle. (The CDC later expanded its guidelines to encourage biking, walking, and driving with household members as well as driving alone.)

The MTA has not been getting much help from its mayor, either. Bill de Blasio seemed to shrug off the looming possibility of apocalyptic gridlock, telling reporters recently that “you may see people use their cars more in the short term.”

And it seems that’s the case, notes the Times: “In recent days, traffic across the city’s bridges and tunnels has risen to within 60 to 70% of pre-pandemic levels.” And even more cars coming down the turnpike seems likely, given that de Blasio “has so far resisted taking any sweeping measures to prevent a surge in traffic or encourage commuters wary of the subway to use other modes of transit, like bicycles.”

He did, however, approve the temporary closure of 160 kilometres of streets to cars—about 1% of the city’s roadway, notes the Times. But de Blasio has proven no friend to the city’s bike lane expansion program, and, “for now, the city’s limited bike lane network does not have the capacity to absorb a flood of people cycling to work.”

The city’s transit advocacy groups are anxious, sensing a critical opportunity slipping away. “In New York we are hesitating, we are making false starts and not being strategic,” said Danny Harris, executive director of Transportation Alternatives. On the citizen level, though, the preference seems clear: “The number of trips taken on Revel, an electric moped ride-sharing service in Brooklyn, Queens, and parts of Manhattan, jumped by over 200% compared with before the pandemic.” Bike shops are booming, and bike-sharing programs are experiencing all-time highs in registrations.

But if history is anything to go by, the status quo may reassert itself all too soon. “After nearly every catastrophe that drew riders off the subway—the September 11 attack, hurricanes, and train derailments—the New York commute eventually returned to pre-crisis normal,” writes the Times. If the city is to choose a different path for the long term, it’s going to take a lot of change.

“We should seize this moment,” said Samuel Schwartz, a former New York City traffic commissioner. “The question will be whether there is the political will to do so.”