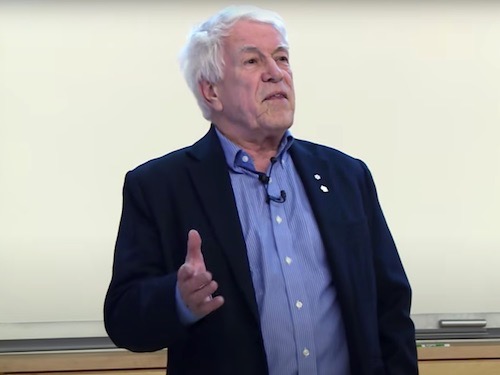 Canada’s climate and environment community lost one of its most persistent, knowledgeable, and creative voices and The Energy Mix lost one of its heroes and partners June 1 when Silver Donald Cameron died in hospital of lung cancer at age 82.

“He cared deeply about our country and the people in it and the people who he met,” his niece Amy Cameron told CBC. “He believed that he could and would and should make a difference.”

Exactly a year ago, on June 7, 2019, Don was onstage at Cape Breton University’s Boardmore Theatre after being named first chairholder of the university’s new Farley Mowat Chair in the Environment. “Farley was not only a dedicated and fiery environmentalist, but he was also a dear friend, and I will use that same fire and dedication in my role as chairholder to continue in his tradition,” he said at the time.

Don was born in Vancouver, later adding “Silver” to his name “to distinguish him from other Donald Camerons,” CBC recounts. He worked as a journalist, university teacher, playwright, and documentary filmmaker, wrote regular columns for the Halifax Sunday Herald and the Globe and Mail, and was awarded the Order of Canada, the Order of Nova Scotia, and the Queen’s Diamond Jubilee Medal in 2012.

His latest book, Blood in the Water, is scheduled for release this summer. His previous, Warrior Lawyers, chronicled the work of environmental justice campaigners from Manila to Manhattan, from Canada to The Netherlands, from Ecuador to Scotland.

Veteran journalist and former Energy Mix co-curator Chris Wood recalled Don asking him to review Warrior Lawyers as a “manual for legal activism” when he completed it in 2016. “The volume, written when Don was already well advanced into his seventies, could and should serve today’s young activists as a manual for changing the world, one legal victory at a time,” Wood said.

Throughout, “only one idea was forbidden among the men and women the book profiles: giving up. No matter how dark the outlook and unlikely the odds of winning, they never gave up. Don didn’t either.”

Don “was first and foremost a storyteller. He was a remarkably attentive listener who was so full of engagement and curiosity and interest,” Amy Cameron said. “He was just a very engaged human being who loved people and loved stories and loved hearing people’s stories.”

And “my God, he loved to share stories of his life and the people that he’d met,” she added. “He had such a great knack for catching a turn of phrase or describing. He would hang on to a sentence that someone said, the particular cadence and the way that they said it and the words that they used, and he could pull it back out again. And suddenly you were with him in the scene.”

CBC stresses Don’s deep interest in environmental issues, and Amy Cameron said her uncle was always deeply concerned for others and the challenges they were facing. “[He] was unafraid of hearing that or wading into those waters or talking about difficult subjects,” she said. “And I find that to be one of the greatest gifts he gave to me, was listening and then sharing his own life experiences in a way that I felt heard.”

One of Don’s major projects in recent years was The Green Interview, a site that consolidates in-depth, hour-long video interviews with more than 100 leading environmental thinkers and doers from across Canada and around the world. “The world’s biggest issues. The world’s finest minds,” the site’s tagline reads.

Don’s friends and colleagues are remembering a magnificent, committed communicator who was fiercely devoted to environmental justice and kind to those around him.

“Oh, Don,” said Climate Action Network-Canada Executive Director Catherine Abreu, who previously worked as energy coordinator at the Ecology Action Centre in Halifax. “What a kind, brilliant man. He was as dogged in his activism as he was in his journalism. It was always a coup when he covered a file I was working on at the EAC, and his Green Interviews were such a tribute to our movement heroes. He will be sorely missed.”

“Don was the kind of journalist other journalists of my generation and inclination wanted to be like,” Wood wrote. “His work was always led by reporting but guided by a heart that wished the best for the world and for people. He was an elegant writer but his interests were focused on the practical: how can we salvage this damaged world. I will miss him deeply.”

“Don’s energy, passion, intellect, and love for people, planet, and justice permeated everything he did,” said Diane Beckett, executive director of the Churchill Northern Studies Centre in Manitoba. “He was a whirlwind of compassion and energy, drawing people in with his generous spirit. I will dearly miss his emails that came out of the blue, always personal, always supportive. He showed by example how much can be done by one human being who cares.”

“Silver Donald Cameron’s was one of Canada’s great voices—a fact not universally known because SDC had the wisdom and the humility to haul out in his adopted Maritimes and stay put,” wrote legendary folk singer Bob Bossin. “His pen was, by turns, humane, funny, moral, and critical when criticism was in order. He wrote passionately about the environment before it was called the environment.”

“It’s sad that there will be no further additions to that estimable stack of books and articles,” Bossin added. “But me, I have the warm memory of eating fresh-caught lobster off newspapers spread across that kitchen table in d’Escousse. We will do it again, old comrade, someday in Fiddler’s Green.”