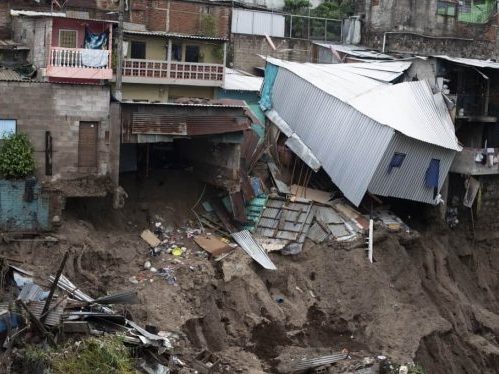 Hurricane season in the East Pacific and the Gulf of Mexico is off to an early and deadly start this year, with 14 killed as Tropical Storm Amanda swept through El Salvador and forecasters keeping a close eye on Tropical Storm Cristobal as it moves toward the Texas and Louisiana coasts.

Amanda destroyed about 200 homes, forced 4,200 to evacuate, and left four people missing on Sunday, EcoWatch reports. Cristobal is expected to reach hurricane force, and is already triggering warnings to fossil industry operators in the Gulf of Mexico, Bloomberg writes. By Tuesday, that second storm had already marked the fastest start to the hurricane season since 1851, tweeted Colorado State University hurricane researcher Phil Klotzbach.

San Salvador Mayor Ernesto Muyshondt said the capital city had seen about half of the country’s deaths due to Amanda. “We are experiencing an unprecedented situation: one top-level emergency on top of another serious one,” he told Agence France-Presse. So far, El Salvador has reported 2,582 COVID-19 cases and 46 deaths.

In the Gulf, meanwhile, “everyone in the [fossil] energy production area needs to be aware of this one,” said Jim Rouiller, lead meteorologist with the Energy Weather Group LLC. “I think we have a good chance of a hurricane, and the area from Houston and Galveston to New Orleans seems to be the most likely target.”

As of Tuesday, Cristobal’s winds had reached 40 miles/64 kilometres per hour, still short of the 74 miles/120 kilometres per hour that would classify it as a hurricane. But water temperatures in the Gulf of Mexico were in the upper 80s Fahrenheit/around 30°C, “which is high octane fuel” for winds, Rouiller said.

“Storms in the Gulf of Mexico are closely watched because offshore platforms account for 16% of U.S. crude oil production and 2.4% of natural gas production,” Bloomberg adds, citing U.S. Department of Energy data. “More than 45% of U.S. refining capacity and 51% of gas processing capacity is located along the Gulf Coast,” and “even a weak system can force evacuations and temporary shutdowns. The storm will likely cross the offshore platforms Sunday before making landfall on Monday.”

In Mumbai, India, meanwhile, authorities reported no deaths or major damage after Cyclone Nisarga became the first in more than a century to hit the inland community. “With powerful storms a rarity, there were no pre-existing cyclone shelters, and many of the city’s large and sturdy buildings have already been converted into coronavirus isolation or treatment facilities,” The Associated Press reports, citing a national disaster response spokesperson.

But about 10,000 people were evacuated from their homes ahead of the storm, and another 100,000 were moved out of low-lying areas in the states of Maharashtra and Gujarat, both already hard hit by the pandemic, with authorities worrying that heavy flooding would impair health systems that have already been overwhelmed.

“If hospitals and clinics are damaged by the cyclone, the city won’t be able to cope with the large number of COVID-19 cases, and social distancing measures will become virtually impossible to follow,” said Save the Children in India CEO Bidisha Pillai.

2.0°C Would Shift Once-in-a-Century Storms to Once in Five Years, Canadian Study Concludes