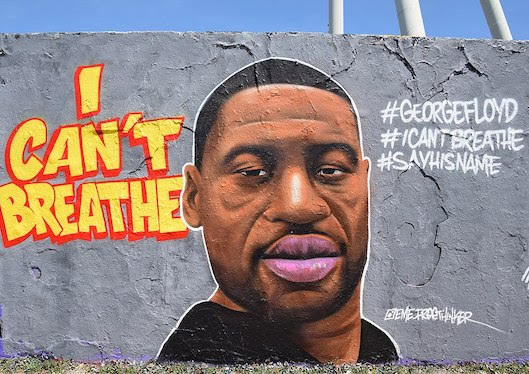 In the U.S., “prominent groups in the environmental movement—which has long struggled with a dark, racist past—are speaking out against institutional prejudice and calling for the movement to better prioritize social justice,” Grist reports.

“For too long conservation and environmental movements have not spoken up to address the long-standing challenges that non-white communities face,” said Environmental Defense Fund President Fred Krupp. “Environmental organizations should work to bring down the barriers that affect Black, people of colour, and Indigenous communities.”

“There is no just recovery for climate without addressing the systemic extraction, harm, and violence towards Black communities,” 350.org added. “As a global organization working to stop the climate crisis, we know that systemic racism is deeply connected to climate change, and 350.org is in solidarity with all of those demanding justice.”

Those statements and many others reflect U.S. environmental groups’ efforts over the last few decades “to overcome the racist history of the environmental movement,” Grist writes. “Early conservationists were sometimes overtly racist, espousing white supremacy and encouraging the use of eugenics. In the 1960s and 1970s, many mainstream environmentalists were preoccupied with concerns over runaway population growth; prominent thinkers like Garrett Hardin and Paul Ehrlich encouraged sterilization programs. Hardin even suggested withholding food aid to developing countries during famines to cull global population.”

Sunrise Movement Digital Director Mattias Lehman shares his own experience as a Black man living in the Twin Cities region of Minneapolis-St. Paul. “Before my involvement with Sunrise, I didn’t identify with the climate movement,” he writes. “I have always seen the climate movement as too white, too middle class, and often more concerned with trees and polar bears than with the human destruction climate change wreaks disproportionately upon Black and Brown communities around the world.”

But he says the intersectionality of the Green New Deal brought him to the Sunrise Movement, and has drawn so many other people of colour into movements for climate justice—particularly the Indigenous communities that have led the way.

“We see the climate crisis unfold at the border every day, as immigrants from countries driven into famine and drought by climate change come here, seeking a better life, and instead are locked in cages. And we see far too many climate movements remain silently complicit in white supremacy,” he writes.

“This has to change,” he adds. “Sunrise Movement is committed to the fight against racism in all its forms and encourages other groups in the climate and environmental movement to join us in speaking out. Now is not the time to stay on the sidelines.”

In a dispatch from St. Paul, veteran climate hawk Eric Holthaus acknowledges that the history behind Floyd’s killing and the protests that have followed dates back hundreds of years.

Against that backdrop of brutality, “climate change is racist because the system that caused it is racist,” Holthaus adds. “No, rainstorms don’t care about skin colour, but worsening weather worldwide aggravates the divisions in society that already exist because it hits people of colour living in poverty the hardest. Simply put: the reason the world hasn’t been fighting climate change as hard as it should is because powerful people don’t want to stop exploiting people of colour. The urgency of climate change is also an urgency for racial justice.”

“When we say ‘I can’t breathe’—whether it is an officer with a knee on our neck or the pollution which continues to take away our breath—that’s why we march, and that’s why we work so hard to change these dynamics,” Mustafa Santiago Ali, vice president of environmental justice at the National Wildlife Federation, told Grist.

As the protests have gained momentum, Grist cites the League of Conservation Voters, Earthjustice, and the Sierra Club as U.S. organizations that have issued statements. Many of those statements have cited other recent U.S. victims of police of white vigilante violence, including Ahmaud Arbery, Breonna Taylor, Nina Pop, and Tony McDade.

“We recognize that many people are outraged, hurting, and scared right now,” writes Oil Change International. “Thousands of people are putting their bodies on the line to defy and disrupt an unjust system. Many more are playing critical support roles, providing community care, and speaking out. This is a moment both for grief, especially for Black people, and for action, especially from white people, who bear the greatest responsibility for perpetuating systems of white supremacy.”

Oil Change calls for an “end to police violence—violence that is systematically perpetrated against Black communities and communities of colour. Police violence and terror against protestors has been on full display over the past several days. We support calls to defund and demilitarize the police and invest in real solutions that keep communities safe.”

The U.S. Climate Action Network says the climate crisis’ “significant impacts on vulnerable communities are being realized because this country was willing to sacrifice black, brown, and Indigenous lives by placing polluting and extractive facilities in black, brown, and Indigenous communities in the United States, and around the world. The climate crisis is, at its core, a racial injustice crisis.”

Our Children’s Trust Executive Director Julia Olson notes that “people around the globe are demanding justice for the deaths of George Floyd, Breonna Taylor, Ahmaud Arbery, and the countless Black Americans who have been hurt and killed by police brutality and white supremacy. We, the People in 2020, demand that we dismantle the systems of racism and oppression upon which our country was built.”

And on her Heated newsletter [subs here], climate journalist Emily Atkin notes that climate leaders Al Gore, Bill Nye, and the U.S. Citizens’ Climate Lobby issued public statements—all in the 24 hours, she says, after she called them out for not doing so.

In Canada, Climate Action Network-Canada tweeted its solidarity and pledged “to fight racism, white supremacy, colonialism, and any violent, institutionalized injustice that both worsens and is made worse by the climate crisis.” The tweet included a link to a decolonization reading list produced by the Indigenous Solidarity Working Group.

“As we watch people across North America rise up to confront racist police violence and white supremacy, we must grapple with Canada’s long history of state-sanctioned violence against Black and Indigenous people,” added Jennifer Deol of 350 Canada, in a post on Medium. “We know that our planet isn’t in crisis only because of rising emissions, but because of systems of extraction and exploitation that put profit ahead of people. We have learned through years of organizing people to fight for the climate that we cannot address the climate crisis without addressing rising social and economic inequality, or the deep roots of racism and colonialism.”

In an email to supporters last night, 350 Canada acknowledged that “some of you on our email list may be confused about why a climate change organization is sending an email about racial justice. Every time we send these kinds of emails, we get messages asking us exactly that, so we’d ask in this moment that you join us in reflecting on these connections.”