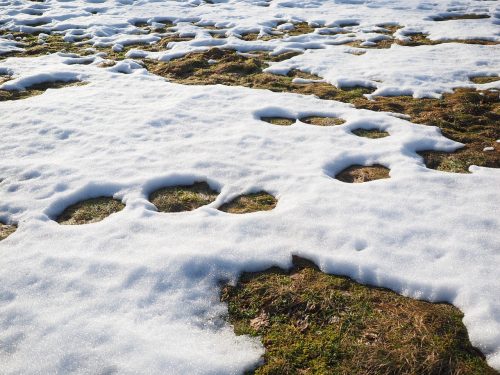 Across all the non-alpine regions of North America, more than 46 billion tonnes of snow has “gone missing” this decade—and the same has happened every decade since 1980, according to the latest, best estimate from climate researchers, posing serious problems for regional administrators seeking to manage reservoir levels.

Compared to a peak average total snowpack of 3.06 trillion tonnes, the missing snow might seem like a mere flurry. But, over time, the collective loss is a big concern, reports CBC. Snow mass that accumulates over the winter eventually becomes spring melt, feeding the watersheds, lakes, and reservoirs that ecosystems and humans depend on.

Distinguishing this latest study, led by the Finnish Meteorological Institute and recently published in Nature, was the decision to combine satellite data with physical measurements taken on the ground, an addition that increased the level of precision the researchers were able to achieve.

“It’s a kind of holy grail-type thing that we’ve really had a hard time nailing down over the years,” said co-author Chris Derksen, research scientist at Environment and Climate Change Canada. While satellites do a good job of capturing surface area, they are less able to measure depth, and, therefore mass. Actual human beings—on the scene and digging holes in the snow—can record depth very accurately.

“The value of those measurements together is much more significant than if we use just the satellite data alone or just the ground measurements alone,” said Derksen. While policy-makers may feel pressured to invest in either satellites or shovels wielded by scientists, “what this shows is you need both.”

But critical gaps still need to be addressed. The most recent study “includes most flatter areas, such as boreal forest and prairies,” but it leaves out alpine regions, “because the satellites don’t have a very good resolution—the smallest area they can measure is about 25 by 25 kilometres, and that’s not good enough for terrain that’s very variable.”

Such mountainous regions account for “only about five to 10%” of the land mass, reports CBC. But omitting them leaves out a third or more of the actual snow mass. What science needs, said Derksen, is a new satellite with resolution capabilities that could reach these areas. To that end, the research team has been working with industry and the Canadian Space Agency to develop a more keen-sighted space machine.

“Our hope is that we can get some traction with this mission,” Derksen told CBC.

Meanwhile, a separate study has called attention to the effect reduced snowfall is already having on the agricultural industry in the U.S.

“Farmers in the western United States who rely on snowmelt to water their crops could be one of the most severely affected agricultural communities in the world,” reports Yale360, citing a study of two western U.S. river basins recently published in the journal Nature Climate Change. Under a 4°C rise scenario, the share of irrigation water produced by snowmelt in the Joaquin River watershed will shrink from 33 to 18%. Snowmelt water available to farmers in in the Colorado River area, meanwhile, will fall from 38 to 23%.

“Climate change is going to cause less snow and early melting in some basins, which could have profound effects on food production,” said lead author Yue Qin.

It’s 2030. Here’s How Calgary Transformed Itself into a Cleantech Capital.