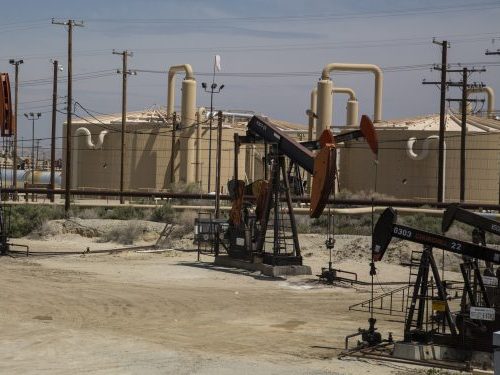 Five of the world’s most colossal fossils will have to face a pair of lawsuits from California cities and counties in state court, rather than trying for more favourable rulings from federal judges, after an appeals court ruled this week that the state level is the proper venue for the courts.

The pair of rulings from the Ninth U.S. Circuit Court of Appeals came on the same day that a federal court judge in Montana threw out 440 oil and gas leases across the western United States, declaring that the Bureau of Land Management (BLM) had failed to follow a sage grouse habitat protection plan when it issued the permits.

In California, one of the rulings denied the fossils’ request to have a case filed by three cities and five counties heard at the federal level, InsideClimate News explains. The other revived a separate case brought by San Francisco and Oakland and sent it back to federal district court for a decision on whether it should properly be heard by a state judge.

“Although mostly procedural, the rulings are nevertheless significant in giving the municipalities the upper hand in the next round of the legal skirmish,” InsideClimate writes, citing legal scholars. “Most significantly, they rejected the industry argument that the liability claims made under California laws are pre-empted by the federal Clean Air Act, a legal tactic that successfully derailed similar climate cases over the last decade.”

“Today’s Ninth Circuit decisions represent a very big win for the California local governments bringing these climate change-related lawsuits and, correspondingly, a major loss for the carbon-based energy industry,” Richard Frank, director of the California Environmental Law and Policy Center, told ICN. “The carbon-based energy defendants should be worried about today’s decisions, and what they portend for the future resolution of these cases.”

While it could still take years for the cases to be resolved, cities and climate hawks declared a major victory. “The lawsuits claim Chevron, ExxonMobil, ConocoPhillips, BP, Royal Dutch Shell, and other companies created a public nuisance and should pay for damage from climate change and help build sea walls and other infrastructure to protect against future impact—construction that could cost tens of billions of dollars,” The Associated Press reports. They also allege the fossils “promoted petroleum as environmentally responsible when they knew it was contributing to drought, wildfires, and sea level rise associated with global warming.”

District Court judge William Alsup previously rejected the lawsuits brought by the cities of San Francisco and Oakland in 2018, after famously conducting a public master class to have both sides brief him on climate science. “The problem deserves a solution on a more vast scale than can be supplied by a district judge or jury in a public nuisance case,” Alsup wrote, in a verdict that accepted the science but left other cities with similar cases “reeling”, according to news reports at the time.

It was a dramatically different story this week. “It is time for these companies to pay their fair share,” said San Francisco City Attorney Dennis Herrera. “They should not be able to stick taxpayers with the bill for the damage they knew they were causing. We will continue to hold these companies accountable for their decades-long campaign of public deception about climate change and its consequences.”

AP says the rulings “are expected to meet continued challenges that could include a review by a larger 9th Circuit panel and, eventually, review by the U.S. Supreme Court.” But UCLA environmental law professor Ann Carlson, who provided free legal advice to the cities, said the rulings bring the cases closer to a discovery process that could lead to the release of some powerfully incriminating material.

“This means they can depose top executives about what they knew and when they knew it and what oil companies did to fund a campaign to dissuade the American public that climate change was happening,” she told AP. “The oil companies’ strategy is to keep the light from shining on their own behaviour. This gets closer to allowing plaintiffs to shine that light.”

In Montana, meanwhile District Court judge Brian Morris ruled that Donald Trump’s BLM “undercut” a conservation plan it had enacted in 2015 for the threatened sage grouse. “The decision strikes down a 2018 memo that sought to change that plan, meaning the government will have to return millions of dollars for oil and gas contracts spread over some 336,000 acres,” The Hill reports.

“The errors here occurred at the beginning of the oil and gas lease sale process, infecting everything that followed,” Morris wrote in his decision.

“The court’s decision is not only good news for the sage grouse, it reaffirms the historic plan that BLM worked out with farmers, ranchers, conservationists, energy groups, and government officials,” said Earthjustice attorney Michael Freeman, who represented conservation groups in court. “It confirms that the Trump administration violated the law in bulldozing those commitments in its haste to sell off lands that are owned by all Americans to the oil and gas industry.”